Northwood Councilman E. D. Eckert was born in Columbus, Wis. on the 10th day of August 1858. In the spring of 1876 he emigrated to Winneshiek county. Iowa. After three years in that county he came to Northwood and entered the em­ploy of the firm of Eckert & Williams. After three years of service with this firm he resigned his position and went to seek his fortune in the far north, locating at Grafton, N. D., where he remained for six years. In 1888 he again returned to his native state of Wisconsin where he spent three years. In 1891 he came back to Northwood and again took up his old work with Eckert & Williams, where he has been employed continuously for 16 years.

Mr. Eekert was joined in marriage on the 14th day of April, 1885, to Miss Kate Temple of Portsmouth, Ohio. The ceremony was performed in Campbell, S. D. They have three children all residing at home in Northwood: Agnes May, Shirley T. and Emery Neal.

In March l899 Mr. Eckert was chosen a member of the Northwood city council, a position which he has held continuously for the past eight years. Mr. and Mrs. Eckert are loyal and consistent members of the Methodist church, he having been one of the trustees of that organi­zation for a number of years past. In politics he is a republican. 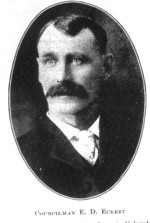