Northwood Councilman L. O. Brown was born at Vossevangen. Norway and came to America while yet a young boy. He arrived in Northwood in the fall of 1883. Alter attending the public schools of Northwood for one year he went to Decorah, Iowa, and entered Decorah Institute and Busi­ness College. After two years in this school he returned to Northwood, but soon went to Chicago and took a course in pharmacy in Northwestern University.

In the autumn of 1888 he entered into partnership with Nels Thorson, under the firm name of Thorson & Brown. They opened a pharmacy in the building now oc­cupied by G. I. Kaasa's store. After three years in this location they erected the splendid two story brick block which they now occupy, and where they have one of the best equipped pharmacies in northern Iowa.

Mr. Brown has prospered in business and is now rated as one of Northwood's well-to-do citizens. Besides his drug business he has dealt extensively in real estate and now has landed interest in several states. In politics he is a republican and in March 1904 he was chosen a mem­ber of the city council, being re-elected in l907 without opposition. Mr. Brown is an enthusiastic automobilist and his recreation hours are spent with his machine along the beautiful drives in the environs of Northwood. 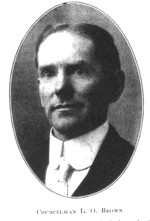