Northwood Councilman G. M. Emery was born in McHenry county, Ill., on the 1st day of Nov., 186l. When he was three years of age the family removed to Rock county, Wiscon­sin, where he grew up on a farm. In 1880 he came to Northwood and entered the employ of his brother in the drug business, where he proceeded to study in connection with his labors with a view of becoming a registered pharmacist. In 1885 he went to Mitchell, S. D., passing the examination before the Dakota Board of Pharmacy, being the first man to pass the examination in that state. After, spending one summer in Dakota he came to Mason City. Iowa, remaining three months. Having successfully passed the Iowa examination he came to Northwood and formed a partnership with A. T. Gordon in the drug firm of Gordon & Emery. This firm had been in business but two months when their store was burned. After the fire Mr. Emery decided to try it alone. Since that time he has been in the drug business continuously in Northwood, having a splendidly equipped store. Besides his drug bus­iness Mr. Emery has extensive real estate holdings and does a considerable business in buying and selling farm lands.

Mr. Emery was united in marriage in December 1886 to Miss Nettie Orahood, the ceremony taking place in Northwood. They have two children, Lila, who has just graduated from our high school and Robert. In March l906, Mr. Emery was chosen as a member of the city coun­cil. He is an enthusiastic automobilist and has one of the best equipped 1907 model touring cars to be found any­where. 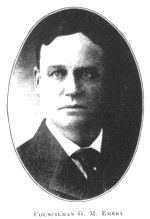