Edwin M. Sabin was born in New Tusket, Nova Scotia April 23, 1876. In 1882 the family removed to Hayward, Wisconsin, where his boyhood days were passed. In l874 he graduated from the Hayward High School. The same year he passed a competitive examination for a West Point cadetship. but declined the appointment. He then taught district school one year. In 1895 he entered the Oshkosh. Wis., normal school from which in­stitution he graduated with honor in the class of 1897. In September 1897 he became principal of the Fourth ward school, of Sheboygan. Wis., which position he held for three years.

Resigning his position in the Sheboygan schools. Mr. Sabin accepted a clerkship in the census bureau. In the autumn of 1900 he entered the Columbian law school. In November l90l he was appointed to a position in the bureau of pensions, which place he retained throughout his stay in Washington. In June 1903 he graduated from the Columbian law school, and in November l904 he came to Northwood. forming a partnership with Atty. A. L. Thompson, under the firm Thompson & Sabin. This firm has finely equipped offices on the second floor of the fine corner brick structure known as the Thompson block. Though the youngest firm in the county in point of length of practice, they enjoy a healthily growing trade, having recently added a new and complete set of abstracts to their equipment.

Mr. Sabin was joined in marriage to Miss Jennie E. Stewart, at Vernon, Wis., on the second day of September 1903. They have one daughter Jennette, born in Nov., 1905. Mr. Sabin is always interested in questions of the recently formed library association of Northwood. 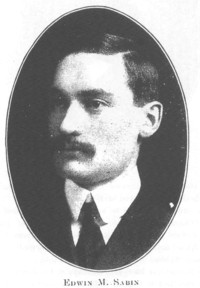