Dr. E. H. Dwelle was born in Northwood September 17th, 1874. He attended the public school of his native town, graduating from the high school in the class of 1890. In 1892-93 he attended the Iowa State College at Ames and in 1895 entered the medical department of the State University of Iowa where he remained for two years. In 1897 he transferred his studies to the medical department of Northwestern University, in Chicago, graduating from this institution in the summer of 1899.

After completing his medical education he was chosen house surgeon in Mercy Hospital. Chicago, where he remained until December 1900 when he returned to Northwood and opened an office. His hospital practice has made him especially skillful in certain lines and though the youngest physician in the city in point of years he has established a good and growing business. He has only the first floor office in the city, constructed with a view to the needs of the practice. 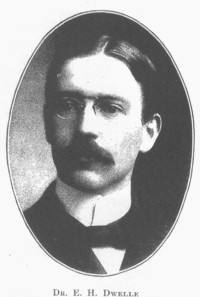