Bertel Bert McCandless, age 90 of Whiting, Iowa, passed away at his home April 1, 2022 after a brief battle with cancer.

Per Bertels wishes, cremation has been accorded. A Celebration of Life will be held at a later date when it warms up per Bertels wishes. Arrangements are under the direction of Goslar Funeral Home and Monuments, Onawa, Iowa.

Bertel Dennie, was born on December 10, 1931, the first-born child of Courtney and Flavia (Mander) McCandless. He was raised and resided in Whiting his entire life. He learned about farming and developed his hard work ethic at an early age from his father, grandfathers, and uncles. While in school Bert participated in sports and started his lifelong love of baseball.

Bertel married Ardis Brenden on October 6, 1950. To this union two children were born, a son, Dennis in 1951, and a daughter, Terry in 1953. While raising their children, Bert and Ardis were busy with work, bowling, square dancing, being scout leaders, little league coaching, camping, card parties, and many social gatherings with friends and family. He also enjoyed fishing, duck hunting, and trap shooting, and ran trap lines for many years.

In 1958, Bertel and Don Ruth navigated the Missouri River in a 16-foot homemade Chris Craft kit boat with a 70 hp Mercury motor. Their journey began West of Onawa and ended 1780 miles later in New Orleans. Bert and Ardis enjoyed many road trips, including one to Alaska in 1989. Bert loved his family and spent a lot of time with his grandchildren. He passed on his passion for sports, especially the Chicago Cubs, and the importance of never touching his T.V. remote! In 1993, he took a trip of a lifetime with his friend Gene Simpson. They visited Hawaii, Japan, China, Thailand, Kuwait, and Egypt. He was an avid collector of shotgun shells, marbles, coins, watches, and many other vintage items. He began attending flea markets where he bought, sold, and traded his wares, and formed lifelong friendships. He was proud of his fantastic gardens and his prize-winning produce. Bert raised vegetables and beautiful gladiolas which he shared with everyone and anyone.

Bert was a 50 year member of the Masonic Lodge and Scottish Rite.

As Bertel slowed down in life, he enjoyed his friends at the coffee shops, senior lunches, and those in the care centers. He had a wealth of knowledge, and was always ready for visiting. He had open heart surgery in 2002, and demonstrated how tough he truly was. Then in 2020, he was one of the first persons in the area to contract Covid 19, and survived 18 days on a ventilator at the age of 88! Those fortunate enough to have met Bert will remember him as one of a kind. He never met a stranger. He will be missed, and remembered with smiles and admiration.

He was preceded in death by his parents, Courtney and Flavia McCandless; an infant brother, Leon; brother, Donnie, and son-in-law, Mark Schaaf.

The family is requesting no memorials. In lieu of flowers, just plant a garden in memory of Bert. 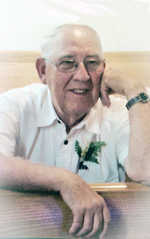