George Kirk Green was born on October 20th, 1835 in Plain Grove Township, Mercer County Pennsylvania the son of Abraham Green 1796-1873 and his wife Martha Jane Gilfillan Green 1798-1852. George was one of thirteen children and his siblings were Susanna, Jesse, Martha, Alexander, Sarah, John, Maria, Abraham Jr., Nancy, James Gilfillan, Eli, and Elizabeth Green. George was listed as 58 tall with a dark complexion, brown eyes, black hair and by occupation was a farmer.

When the War Between the States broke out George honored the call to duty whereas he enlisted into the Union Army on August 15th 1861 as a Private with Company B 83rd Regiment Infantry Pennsylvania rising to the rank of Corporal serving under Capt. Daniel Saegrrs (Saegrus). His brother James G. Green 1828-1911 also enlisted into the Union Army serving with Company C 17th Regiment Infantry Iowa.

On December 13th, 1862 George was wounded during the Battle of Fredericksburg in Fredericksburg Virginia being subsequently discharged from service on September 20th, 1864. The 83rd lost 282 officers and men who died while fighting for the Union; only the 5th New Hampshire lost more--295. George would later file for a pension number 356528 on October 18th, 1897.

In 1867, he came west to try pioneering and settled in Missouri where he remained but four years and then came to Kossuth County, Iowa and settled on a farm southeast of Bancroft, by an by he retired from the farm and resided in Bancroft where he was a member of Bancroft Post G.A.R. No. 496 and was prominent in all the doings of this beloved order and where he was converted with the M.E. church. Around 1906 he sold his interests in Bancroft, spent one year at Manchester, S.D., then returned and located in Burt where had become a familiar and welcome figure.

On February 17th, 1917 after a lengthy illness George K. Green passed from this life having by his side his children and his wife together with a score or more of grandchildren, many other relatives and hosts of friends who were left to mourn his departure and look forward to the reunion in Heaven. The body was laid to rest in the Burt cemetery, borne by six sons of the former Comrade and escorted by the remnants of that noble company (comrades) still left with us. G. K. will be sadly missed for he was a devoted husband, kind and loving father and a good friend." 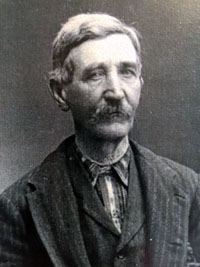