James Gilfillan Green was born on April 15th, 1828 in Mercer County Pennsylvania the son of Abraham Green 1796-1873 and his wife Martha Jane Gilfillan Green 1798-1852. Jamess middle name came from his mother Marthas maiden name in honor of her family. James was one of thirteen children and his siblings were Susanna, Jesse, Martha, Alexander, Sarah, John, Maria, Abraham Jr., Nancy, George Kirk, Eli, and Elizabeth Green. Growing up in Pennsylvania James learned the skilled occupation of being a Tailor and Farmer.

In the spring of 1856 James and his wife Sarah and family left Pennsylvania and began their journey to Iowa. They took a train from Pennsylvania to Chicago whereas they walked for some time to board the next train which took them to Dubuque Iowa. Once James and family arrived in Dubuque he then purchased a covered wagon and continued westward to Irvington. From the book, History of Kossuth County Iowa; A Record of All Important Events, Volume 1: (In the spring of 1856, James G. Green came to the Irvington Community and located on an eighty for his preemption upon which he built a log cabin, where old Joe Hewitt later resided. This eighty is now part of the Sample farm, but the log cabin has long since perished with the lapse of time).

Later, James built a home with a stone foundation and with the lumber from his farm consisting of black walnut. The home was located approximately two miles N.E. of Irvington on Ridge Road and is now vacant. In 1857 James also built his tailor shop which was later moved several times and belonging to Dr. Armstrong who used it as a store for many years.

On July 22nd, 1862 James fell violently ill and was later hospitalized. Because of his illness, he was discharged from service on September 27th, 1862 in St. Louis Missouri. Upon his return to Iowa James then joined the Northern Iowa Border Brigade with Company A, under the command of Capt. William Ingham serving as a cook.

After the conflict and in his later years (having lost his wife Sarah in 1904) James lived with his daughter Sarah Alyce Green Brass and would also travel between Iowa and Pennsylvania as did his brother George. Before going blind James being a tailor taught his granddaughters Edna & Blanche Brass Lage 1902-1994 how to sew a button on a coat so that it would lay nice. He was nick-named Uncle Jimmy and he also liked chewing tobacco. Blanche during her later years would recount for relatives how James had served as a cook during the Indian uprising. She also related how she enjoyed being out on the porch and James who was blind at that time and his friend from the Union Army was deaf. The men would relate stories of when they served together in the Union Army and Blanche would laugh because one couldn't see and the other couldn't hear which she thought was extremely funny as they would try to communicate with each other. Family members also ran a wire from the house to the outhouse for him to use the outhouse unassisted.

On December 8th, 1911, James Gilfillan Green an early pioneer of Kossuth County of Irvington Iowa passed away from this life because of old age being 83 years, 7 months and 23 days at the time of his death. It was said they heard three death knocks the night James died. A funeral service was conducted and he was buried in the Laurel Hill Cemetery next to his wife Sarah Ann. 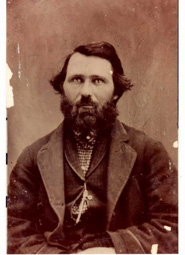