Benjamin "Ben" Christopher JOHNSTON, 20, of Fairfield, passed Tuesday, June 7, 2022, surrounded by his family after a courageous battle with cancer. Visitation for family and friends will be 2:00 p.m. to 4:00 p.m., Sunday, June 12, 2022, at Fairfield High School Auditorium, 605 East Broadway, Fairfield, IA. A celebration of life service will follow starting at 4:00 p.m. with Pastor Danny Cary officiating.

Memorials may be made to the family and mailed to Allison JOHNSTON, 1005 West Hempstead, Fairfield, IA 52556.

Ben was born December 22, 2001, in Ottumwa, to Christopher and Casey Ann (TAYLOR) JOHNSTON.

Ben graduated from Fairfield High School with the class of 2020, earning his high school diploma along with his welding certificate. Ben worked at Flamingo Lanes Bowling Alley and was known as the "Bowling Guy". He also worked at Sears and for local farmers.

Ben loved to be outside fishing, swimming, or camping. One of Ben's favirote memories was when he went camping at Backbone State Park with his grandparents. That's where he caught his first fish. Ben also loved playing football and baseball. He was a huge Green Bay Packers fan. Some of his other interests were renovating and fixing up old farm tractors, and his love for the Ford Mustang.

He was preceded in death by his paternal grandfather, Michael JOHNSTON.

Online condolences may be made to the family at behnerfh.com. 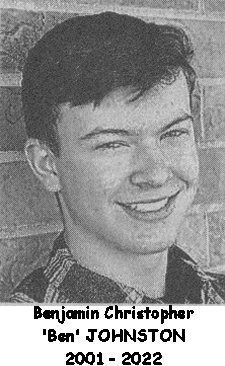