Heath John GOSNELL, of Fairfield Iowa, passed away on February 17, 2022, at the Iowa Methodist Hospital in Des Moines Iowa, at the age of 46 (note: in Polk Co., IA). Heath was born in Tampa Florida, on July 20, 1975, to Ronald and Janice (BROWN) GOSNELL. He was the first of their three boys. With Ronald in the military, they moved around during his early years but eventually settled in Wichita, Kansas. Heath also lived in Colorado and Missouri before moving to southeast Iowa where he lived out the remainder of his life.

Heath enjoyed Steelers Football, cooking for everyone he knew, fishing and simply hanging out with his dog, Romeo and wife, Jessica. He worked as the Head Trainer at Agri Industrial Plastics, Agri is where he found some of his closest friends, who are likely wishing they would have gotten just one more helping of his Mac and Cheese before his passing. Heath loved to cook and did so as if he was feeding an Army.

Heath was preceded in death by his mother, Janice.

He is survived by his wife, Jessica GOSNELL (HARVEY) of Fairfield, IA; his daughter, Cheyenne CROW of Fort Smith, AR, and her children, Karson and Lexi; and his son, Brendon (Fallon) GOSNELL of Warrensburg, MO, and his son, Jaydon GOSNELL of Centerview, MO.

A Celebration of Life will be held in Heath's honor from 2 to 6 p.m. July, 9, at the Walton Club in Fairfield, IA. Come and share a memory. 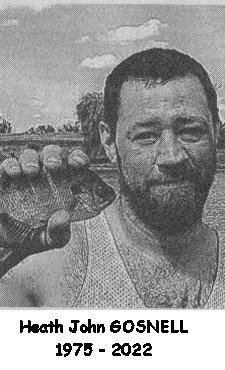