Senator Newberry, from a special committee, submitted the following report and moved its adoption:

Frank Davis Bayless, son of Mills S. and Elizabeth A. (Reed) Bayless, was born in Pendleton, Madison county, Indiana, October 9, 1840, and died in California, March 6, 1920, in his eightieth year.

He came west with his mother, a younger brother and two younger sisters in 1853, and in 1855 moved with the family to Dodge county, Minnesota, where he assisted on the farm until the fall of 1856, when he returned to Indiana and attended high school for two years. In 1858, he returned to Minnesota, where he was occupied with farming, teaching and the study of medicine until the breaking out of the Civil War.

He promptly enlisted at the call of his county in the Second Minnesota Infantry in 1861, and served creditably in the Kentucky and Tennessee campaigns, but his health becoming impaired, he received an honorable discharge and returned to Minnesota.

On February 5, 1863, he was married to Miss Harriet Dresser at Concord, Minnesota. Four children were born to Mr. and Mrs. Bayless, of whom his sons, John R. Bayless and Fred Bayless survive.

With returning health Mr. Bayless was not content to remain at home while his country was still in danger, so in the winter of 1864, he reenlisted in the Third Minnesota Infantry. For a time he was assigned to the recruiting service and in April, 1864, joined his regiment in Arkansas with over two hundred recruits. Soon afterwards his knowledge of medicine and drugs caused his assignment to the medial department where he served faithfully until the close of the war, receiving his final discharge September 21, 1865.

During the winter of 1865-1866, he was employed as a clerk in a drug store in Manterville, Minn. In 1866, he moved to Elkader, Iowa, and engaged in the business of druggist and conducted a drug store at that place for many years where he built up a large and profitable business.

Mr. Bayless was always a man of constructive ideas and used his efforts and means for the permanent growth and improvement of the localities where he was interested. In 1897, he built the Hotel Bayless in Elkader, one of the best hotels in northeastern Iowa, which remains a monument to his memory. He helped to finance and build the Congregational church in his home town and later presented it with a pipe organ. He was one of the organizers of the present State Bank of Elkader. He helped to finance and start the Elkader Register in 1878, one of the leading papers in the county. About the last of his business ventures was the taking over of a small sanitarium at Prairie du Chien, Wisconsin, and the starting of the new sanitarium at that place, and the vision of its future possibilities has been fully justified by the successful realization of later years.

Always active for the welfare and advancement of the community he gave freely of his time and means to its interests. He was a member of the school board continuously for twenty-four years, and of the town council for a long time.

Mr. Bayless was a staunch democrat and intensely interested in political affairs, wielding a large influence in county and state politics.

He served as senator from the 36th district in the 20th, 21st, 22d, and 23d General Assemblies, and was one of the leading members of the Senate.

Mr. Bayless retired from active business some years ago and has since lived in Chicago and for some time in a sanitarium in southern California, where he died. His remains were brought to his old home and interred in the family lot in the Elkader cemetery.

Therefore, Be It Resolved, That the Senate has heard with sorrow and regret of the death of the Honorable Frank D. Bayless, and it recognizes the worthy services he rendered the state during the four sessions he was a member of this body, and hereby extends to the bereaved relatives and friends its sincere sympathy.

Be It Further Resolved, That these resolutions be spread upon the records of this Senate and that the same be engrossed and a copy sent to his surviving son, John R. Bayless, at Elkader, Iowa.
Byron W. Newberry
Geo. S. Hartman
W.H. Scott

The resolution was adopted unanimously by a rising vote. 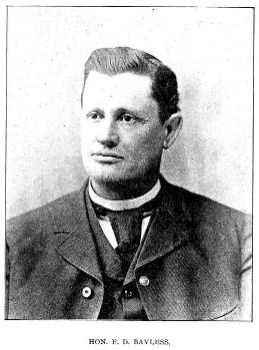