Thirty-five people - including educators, nonprofit leaders, a pair of sisters and a warden - opened their mail recently expecting bills and junk mail. Instead, they found a new pair of shoes (and a check for $3,500)!

The surprise was in honor of the Dekko Foundation's 35th birthday.

Two local teachers were among those honored with gifts from the Dekko Foundation.

Terri Newton, teacher at Diagonal - Dekko had this to say about Newton: "Terri cares for students' emotional needs. When a Diagonal High School student lost a mother to cancer, Terri supported that teen in her revival by planning the fundraising event: Knock Out Breast Cancer!"
"Stepping back to consider young people's developmental needs is the number one thing adults can do to help children thrive," said Tom Leedy, Dekko Foundation president. "To celebrate our birthday, we chose 35 people whom we've seen step back and do what's best for children's growth and development. We asked these folks to keep on stepping back and sent them brand new shoes to do it in."

The 35 also received a $3,500 grant to support their organization or charitable cause.

"Mr. Dekko left us with a mission to foster economic freedom through education." said program director, Sharon Smith. "We think the surest way to economic freedom is to build skills, knowledge and character in young people as they grow and develop."

"For our birthday we wanted to spread recognition across the states we serve," Smith explained. "We also wanted [to] homor people of different ages and elevate a new tier of leaders. We asked our staff to nominate people who are working to give children and youth what they need to thrive. We found a great group of leaders!"

Honored by the Foundation were people one might expect -- like teachers and nonprofit leaders. "We also found some not-so-usual standouts," Smith said. "We recognized a mayor a man who runs a historical site and the warden of a jail!"

The Dekko Foundation was started in 1981 by Chester E Dekko, an entrepreneur whose businesses made component parts for the auto, lighting, household goods and office furniture industries. When Mr. Dekko passed away in 1992, his estate went to support the Dekko Foundation.

A child of the Great Depression, Mr. Dekko was passionate about helping people gain economic freedom which he defined as "the ultimate liberty to make decisions about one's own life." The Foundation's current endowment totals $233 million. Since its beginning in 1981, the Dekko Foundation has granted $196 million with the vision of preparing young people to become econimcally free.

The Foundation makes roughly $11 Million in grants each year across communities where Mr. Dekko had an interest. Those communities include Clarke, Decatur, Lucas, Ringgold and Union counties in Iowa along with communties in Alabama, Florida, Indiana and Minnesota.

The Foundation welcomes grant proposals that are aimed at building skills, knowledge and character in young people from birth to age 18.

Photograph courtesy of Mount Ayr Record-News
Transcription by Sharon R. Becker, May of 2016 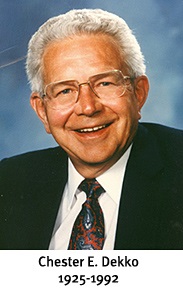