The Mount Ayr Community Schools Hall of Fame was established to create a lasting tribute to groups and individuals who have brought honor to themselves, their schools and their communities.

The Hall seeks to recognize those who have accomplished extraordinary feats in extra-curricular activities, those who have made significant contributions to the school and alumni who have distinguished themselves in life after high school.

Individuals and groups from any school which is now part of the Mount Ayr Community district are eligible for selection to the Hall of Fame. The committee relies on nominations submitted by the public.

The Hall of Fame Banquet and Induction Ceremony will take place next fall as part of the homecoming week festivities.

Born in 1885 on a farm southwest of Delphos, Orr Fisher attended country school in the Delphos area. From that humble beginning, Fisher went on to gain national fame as a painter, sketch artist and cartoonist.

To pay for his art schooling, he worked for the railroad, and as an inventor he received a patent for an automatic whistle used on steam locomotives.

During his prolific career Fisher produced articles, cartoons and illustrations for various publications and operated a cartoon postcard business. He also worked in advertising.

Renowned for his work with oil paint, it has been estimated that he created over 1,000 oil paintings, a number of which may be viewed in Mount Ayr at the Public Library, Restored Depot and Ringgold County Extension office.

Much of his work centered on landscapes, including a number of famous paintings of state and national parks.

He also created whimsical and humorous paintings and sketches and others with religious and spiritual themes.

In the 1940s, Fisher was commissioned by the WPA to paint murals in post offices at Mount Ayr and Forest City.

In the 1950s he built a studio in Woodstock, New York and worked in that artists colony for 10 years.

Eventually Fisher moved to Fresno, CA and established a studio and art gallery.

A 1969 graduate of Mount Ayr High School, McDaniel earned a bachelor's degree in physics and mathematics from Northwest Missouri State University in Maryville.

He was then awarded a National Science Foundation Grant for a physicis research project at Kansas State University. He eventually attained both his Master's and Doctorate degrees in nuclear physics from [the] University of Wisconsin and completed his postdoctoral Fellowship in Radiology at [the] University of Texas Medical School.

His designs and specifications have been at the heart of every PET scanner developed by GE, and he is often referred to as the "Godfather" of every invention in PET detection in the last 30 years.

McDaniel is considered the world's foremost expert in [Page 10] nuclear medical technology. He holds over 50 patents and is responsible for 18 PET scan projects.

An estimated 225 million patient exams have been performed using PET scanners designed by McDaniel, and his work has impacted millions of people who have received PET scans to diagnose illness and evaluate treatment.

Considered one of the top three nuclear physicists in the world, he received the prestigious Edison Award in 2015.

A 1975 graduate of Mount Ayr Community High School, Bruce played on the state tournament baskeball teams in 1973 and 1975.

Ricker operated a solo family practice in Phoenix for 12 years (1984 - 1996) but returned to his hometown in 1997 and began practicing at the Mount Ayr Medical Clinic.

Today, Ricker serves as the medical director for HCI Hospice Care Services and for Clearview Homes and Mount Ayr Health Care Center. He also serves as a clinical instructor for third- and fourth-year medical students at several schools of osteopathic medicine.

Since returning to Mount Ayr with Bruce and their family she was worked at Ringgold County Public Health, but she is better known as a community leader and advocate, immersing herself in volunteer work, writing grants for numerouse Ringgold County organizations and striving to improve life for all in Ringgold County.

Michell holds leadership positions in several local, regional and national boards, including South Central Iowa Community Foundation board of directors and executive board. She has been on the board of directors for both the Princess Theater and Teen Center and helped established endowment funds for both.

For her tireless devotion to the service of others, Michell received the Governors Volunteer Award in 2014.

Between the two of them they have undertaken 12 mission trips, serving the medical and spiritual needs of people in all parts of the world. They have partnered with International Cooperating Ministries to build 12 churches, orphanages and Hope Centers in nine different countries.

In additon to the causes already mentioned, Dr. Bruce and Michell have been silent benefactors to many projects and organizations in the community, including the school, the First Christian Church, and the Neighborhood Center, among others.

A sentiment expressed by several nominators was that we will never really know how many people have been helped, and how many ways the community has benefited through the generous and unselfish way Dr. Bruce and Michell Ricker have shared their time, talents and treasures.

A 1961 graduate of Tulsa Webster High School (Tulsa, OK), "Scotty" earned a Bachelor of Science in education degree from Northwest Missour State University, where he was a wrestling letterwinner for the nationally-ranked Bearcats.

Following his graduation from Northwest in 1966, he began his career in education in Mount Ayr, where he taught physical education for four years and biology for another 16 years before accepting the position as guidance counselor in 1986. Along with his duties in the classroom, Scott coached football, baseball, and, of course, wrestling, serving as head wrestling coach for 30 seasons.

He recorded a career record of 198-137-4 and coached one undefeated wrestling team and two other teams with just one loss. During his tenure he coached a total of 57 state qualifiers, including one individual state champion and three state runners-up.

Scott retired from the school in 2002 (after 26 years) and went to work full time at the Iowa Institute of Character Development, and he ws imstrumental in instituting the Character Counts program at Mount Ayr schools. He also worked with athletes and coaches in the Pursuing Victory with Honor program.

Always one to "walk his talk, " Scotty and his wife Dana had one son, and they adopted two more. They also took a number of at-risk students into their home for extended periods of time.

Saying that he wanted to "finish strong for the Lord," Scot began his third career in 2009 when he became the Midwest Director for International Cooperating Ministries, helping build churches in Africa, Asia and Latin America. He was serving in this capacity at the time of his death in 2013.

Former students, athletes and colleagues praise him for his leadership, committment, loyalty and dedication to building strong character. Many cite him as the most influential person in their lives. 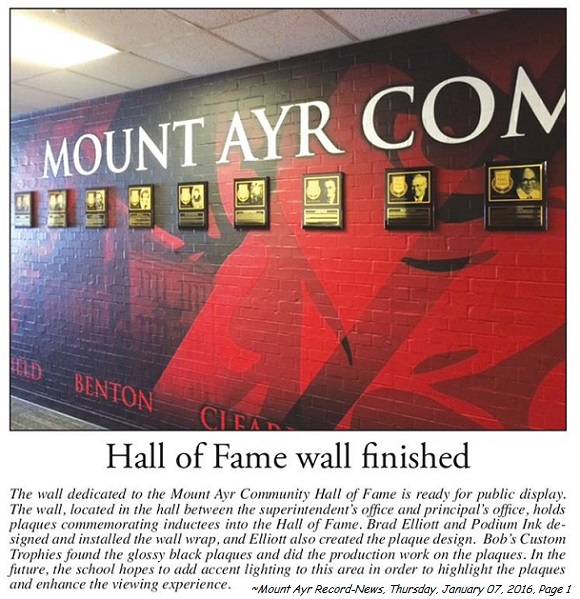