John Morris SCHUCK, 78, of Stockport, passed away surrounded by his family on May 30, 2021, at the Van Buren County Memorial Hospital.

He was born Nov. 12, 1942, to Milton William and Sarah Winifred "Winnie" MORRIS SCHUCK on the family farm near Milton, Iowa. John graduated from Fairfield High School in 1961 and attended Parsons College in Fairfield before joining the 224th Iowa National Guard Engineering Battalion out of Fairfield. Upon leaving the Guard, John moved to Minneapolis to join his future wife while she completed her schooling.

John was twice recognized in 2013 for his contributions to his community. He and Jean were named Grand Marshals of the Stockport BBQ Days parade, and he received the Governor's Volunteer Award for his service to the Seneca Area Agency on Aging. John enjoyed all of these activities and acts of service, but what he enjoyed most was his family. He rarely missed a game, concert or play in which his children and grandchildren performed, and most recently he enjoyed spending time with his great-grandchildren. He would have been the first to tell you that his family was his greatest gift, and the loss of his sons was the most difficult trial that he and Jean faced together. Throughout it all, he remained loving and kind.

He was preceded in death by his parents, Milton and Winnie SCHUCK; and his beloved sons, John Milton SCHUCK and Jason Ray SCHUCK.

The family requests if you attend the visitation and or funeral to please wear a mask. Visitation for family and friends will be from 1 to 2:30 p.m. Saturday at Behner Funeral Home. Funeral services will follow the visitation starting at 2:30 p.m. with Pastor Larry Shipley officiating. Burial will be in Spencer Cemetery (note: in Stockport, Van Buren Co., IA).

In lieu of flowers, memorial contributions may be made to the family and designated to the John and Jason Schuck Memorial Scholarship Fund, Spencer Cemetery or the Stockport United Methodist Church. Cards and memorials may be mailed to Jean SCHUCK, 30313 120th St., Stockport, IA 52651-8021.

Online condolences may be made to the family at www.behnerfh.com. 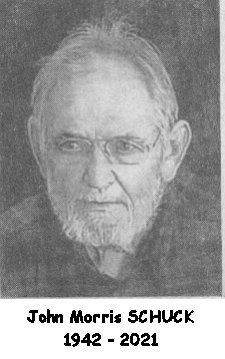