Harold Buttolph, age 91, formerly of Elma, Iowa passed away on Monday, February 1, 2021 at the Patty Elwood Center in Cresco, Iowa.

A public visitation will be held on Wednesday, February 3, 2021 at Lindstrom Funeral Home in Riceville from 11:00 am  noon.

A private family service will be held immediately following visitation with burial at Riverside Cemetery in Riceville.

Harold was born on March 13, 1929 to Robert and Amelia (Funke) Buttolph in McIntire, Iowa. He graduated from Riceville High School. Following graduation he enlisted in the United States Army, serving in Germany.

On June 20, 1954 he married Patricia Graves in Riceville. To this union four children were born. Harold was happy to say he was a farmer all his life. He spent many hours in the garden watering and weeding the vegetables and caring for the flowers, especially the red geraniums. Harold worked the night shift at Oliver so he could see his kids play sports and traveled to many sporting events to watch his grandchildren play. Harold and Patty enjoyed being around others, always making time to visit for a moment.

Harold spent many hours fishing at Lake Hendricks. He loved woodworking and after retiring created many special pieces for his family, which included birdhouses, clocks, toy trucks and everyone had more than a few plant stands. He was a fifty year member of the Masonic Lodge and was also a member of the American Legion.

Harold was preceded in death by his parents and his wife, Patricia. 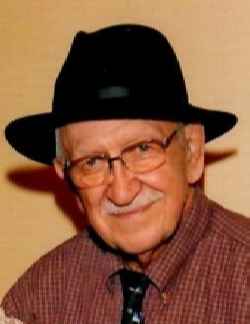