Rev. Chas. McHarness, pastor of the First Baptist church, of Northwood, was born at Pontiac, Mich., Feb. 8, 1873, where his boyhood days were spent. After attend­ing the Detroit Business University he spent two years in Detroit acting as bookkeeper and cashier and then left this work to prepare himself for the ministry. Mr. Mc­Harness graduated from Kalamazoo College. He is also a graduate of Newton Theological Seminary located at Newton Centre, Mass. While a student here he was given the opportunity during his summer vacation of acting as assistant pastor of the Woodward Avenue Baptist church of Detroit. In 1904 he began his first pastorate with the Scribner Street Baptist church, of Grand Rapids, going from there in 1906 to his present charge in Northwood.

Rev. McHarness was married on the 27th day of Feb­ruary, l906, to Miss Harriet L. Calvert of Detroit. Mich. Thev have one son. Robert Calvert McHarness, who was born February 28th, 1907. 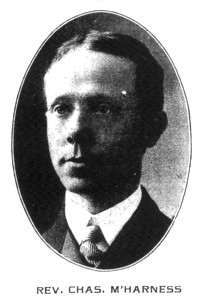