City Clerk C. W. Remore was born on the 9th day of May 1859 in Olmstead county, Minnesota. In 1864 his parents removed to Worth county and settled on a farm 4 ½ miles west of Northwood. In 1870 the family retired from the farm and took up its residence in Northwood. Here the subject of our sketch continued in the public school until the then prescribed course had been completed and then he commenced to learn the barbers' trade. In the spring of l88l he purchased the shop in which he was then employed and he has continued in business for him­self all the time since. In 1901 lie formed a partnership with J. I. Snyder, who in September 1906 sold his interest to A.C. Gregg, since which time the firm has been Remore & Gregg.

In March 1893 Mr. Remore was elected a member of the Northwood city council, a position which he held for nine successive years, retiring April 1st. l902. In the autumn of 1902, C. L. Williams, clerk of Northwood ten­dered his resignation whereupon Mr. Remore was appoint­ed by the council to fill the vacancy. He has twice been re-elected to this position.

Though the municipal waterworks places a larger burden on the clerk than formerly. Mr. Remore finds time from his business, official and church duties, to devote to his family, of which he is unusually fond.

The subject of this sketch was married in Northwood on the 7th day of January, 1880 to Miss Leona Hitchcock. To this union was born three children, Hazel K., who is now one of the popular teachers in our city schools, Har­rison H. and Manilla F.

Mr. Remore is a member of the Northwood Methodist church in which he is an earnest worker. For the past 7 years he has been superintendent of the Sunday school which is in a nourishing condition, no small portion of its prosperity being due to his enthusiastic labors in its behalf.

Mr. Remore's father, H. H. Remore was one of the pio­neers of Northwood. He died in 1893. His mother's maiden name was Nancy Hull. Her death occurred in 1889. He has one sister living, Mrs. O. F. Perkins of Northwood. Mr. Remore has been a lifelong democrat, and should the future give birth to a democratic presi­dent it is more than possible that Mr. Remore might be chosen to preside over the local post office. 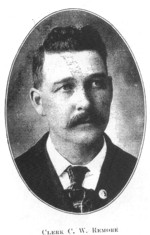