W. A. Willing, mayor of Northwood, was born at Camillus. N. Y. on the 12th day of February, 1871. When he was one year of age his parents removed to Phelps, N. Y., where his father, K. A. Willing, is still a prominent miller. As a boy Mr. Willing learned the milling trade in his father's mill, continuing in his father's employ until some time after his majority. Later he went to Roches­ter. N. Y. and worked at the milling business two years.

In March 1897 he started westward and on the l8th day of that month reached Northwood. intending to pay a visit to his aunt and cousins in this city. He liked the city and its people so well that he decided to make it his future home. In September 1897 he entered the law de­partment of the State University of Iowa, completing in two terms a course he had previously pursued in New York. In May 1898 he passed the examination before the Iowa Supreme Court and was admitted to practice. The same summer he purchased the interest of M. C. Gilmore in the law firm of Lamb & Gilmore and the firm name became Butler, Lamb & Willing, with offices at Northwood and Forest City. One year later Mr. Butler retired and the firm was conducted as Lamb & Willing until 1901, when Atty. W. E. Lamb sold his interest to Mr. Willing and removed to Cedar Rapids where he is still engaged in the practice. For the past six years Mr. Will­ing has conducted the business alone.

Two years ago the Northwood Telephone Co. chose him as its manager, a position which he still holds. Dur­ing his incumbency the business of the company has rap­idly increased. It is now in a flourishing condition and local telephone stock is a standard commodity which yields ample returns. At the annual election held in Northwood in March 1906, the people chose Mr. Willing mayor. He has conducted the affairs of this difficult office with rare good judgment and it is a certainty that he will be again chosen without opposition.

In addition to his legal and official work and the administration of the telephone service Mr. Willing has one of the largest loan businesses in northern Iowa. But in spite ol these duties he finds time to devote loyal service to the numerous lodges to which he belongs. He is a member of the K.P.; the Woodmen, of which he is clerk; the Eastern Star and the Masonic fraternities, being a member of Mason City Chapter Royal Arch Masons. 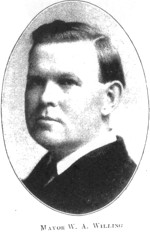