Dr. L. G. Hewitt was horn in Bancroft, Minn., on the 7th day of December 1866, In 1884 he went to Albert Lea and entered the high school. Graduating with the class of 1887. After his graduation he kept books in a mercantile establishment for some months. Then he entered the teaching profession, which he followed at intervals for three years. In 1888 he entered Ohio Medical College, at Cincinnati, Ohio, where he remained one year. After teaching a year to recuperate his finances he entered the medical department of the University of Minnesota in 1890, remaining for the school year 1890-91 . In the autumn of 1891 he continued his course in Rush Medical College in Chicago, graduating with the class of 1892. During the summer vacations of his medical course he studied with the late Dr. Blackmer, of Albert Lea. On the 20th of July, 1892, he came to Northwood and purchased the practice of Dr. N. L. Kean and he has been actively engaged in his profession at this place for the past 15 years. His practice has constantly been a large one often keeping him going at all hours, night or day.

He was married at Albert Lea on the 5th day of Octo­ber, 1893 to Miss Fannie Hazleton of that city. They have one son, Leland H. 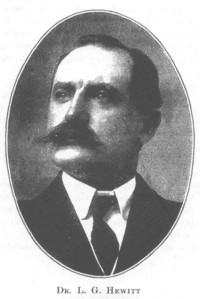