Simon Rustad was the second man to permanently settle in Worth county. His farm lay just west of the farm of G. O. Mellem. He came in June 1854 and re­mained until his death.

He was born at Lillehammer, Norway, Jan. 9, 1826. In March 1852, he married Miss Anne Eliasdather and soon after they emigrated to Amer­ica, stopping for a time in Rock county. Wis., and coming from there to Worth county. Mr. Rustad's first log house had a straw roof and all the primitive hardships of pioneer life were his. In spite of privations he reared a family of nine children and at the time of his death had gained a considerable degree of wealth. His son, Samuel Rustad, was the second white child born in Worth county. This event took place on July 14, 1854. 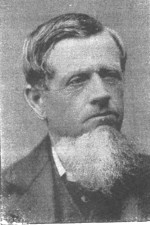