G. O. Mellem and wife were the first pioneers of Northwood and Worth coun­ty. They set­tled on a claim which now com­prises the south­west corner of the city of Northwood in the summer of 1853 For the first year the nearest white neighbor was 18 miles away.

Their son, Ole Mellem, was born, in 1853, being the first white child born in Worth county.

G. O. Mellem was born in Hollingdal, Norway Nov. 18, 1829. He came to America in 1849 and spent one year in Rock county, Wiscon­sin, after which he worked for a time as a rafts­man on the Miss­issippi river. He was married to Caroline Evanson in 1852.

Mr. and Mrs. Mellem were alone in Worth county at the time of the indian massacre at Blue Earth, Minn. The indians invaded the lone cabin and for a time it looked as though the family would be wiped out, but they finally departed, having done nothing more serious than to make some grewsome demonstrations.

The Mellem home was the nucleus around which the first settlement was built. New comers were generally from their native Norwegian province or from Rock coun­ty, Wisconsin, where the had formerly lived. If the set­tlers were able to build all well and good, if not they were welcome to dwell in the Mellem home. And the fact that little ones came to bless that home at least every other year, did not abate the cheerful hospitality of these big hearted pioneers. 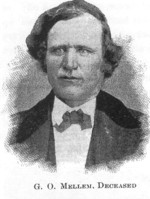