Cashier N. E. Haugen. of the First National Bank of Northwood, was born in Rock county, Wis., Feb. 10, 1867. After having completed a course in the public schools he entered Melton College, at Melton. Wis. where he remained for the years l882-83. The years 1887-88 were spent in the Northwestern Business College, of Madison, Wis. In the autumn of 1888 he came to Northwood and accepted the position of deputy county treasurer under Treasurer Gilbert N. Haugen.

On June 5th l900, he accepted the position of cashier of the Bank of Kensett where he remained until December, 1905, when he was offered the position when he was offered the position of cashier of the First National Bank of Pelican Rapids, Minn. October l5th, 1906, the failing health of Cashier Dow Simmonds of the First Na­tional Bank of Northwood, having made it necessary for him to retire Mr. Haugen was chose as his successor. His wide acquaintance in the county together with his natural aptitude and experience in this work make his services invaluable to this bank.

On Jan. 16, 1875. he was married to Miss Sarah Finch of Kensett. Two children have been born to them. Lois Gail and Leland Nelson. Mrs Haugen and the children are now sojourning in California for the lady's health where they passed the winter of 1906-07. 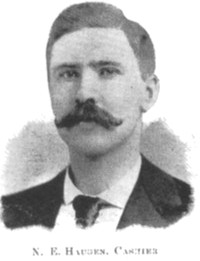