H. T. Toye. president of the Worth County State Bank, was born in the province of Ontario, Canada, on the 12th day of June, 1848. In 1866 he emigrated to Winneshiek coun­ty. Iowa, where he entered the Breckenridge Normal School at Decorah. Soon after his graduation from this institu­tion he was elected county superintendent of Winneshiek county. On August 18, 1875, he came to Northwood and was chosen principal of the Northwood schools, a position which he held for five years. In 1880 he resigned to accept the position of cashier of the Worth County Bank, at that time a private institution. In 1883 he was chosen county superintendent of Worth county to which office he was re-elect­ed in 1885. Before the expi­ration of his second term he resigned and purchased an in­terest in the Worth County Bank, again becoming its cashier. Two years later this institution was reorganized under the state law into the Worth County State Bank. He was elected cashier of this bank, retaining that position until Nov. 1905, when he was promoted to the position of president, being succeeded as cashier by T. S. Hanson. 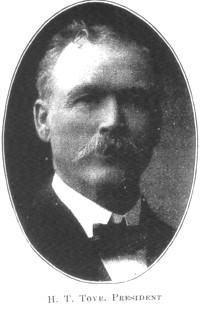