Decorahs Square-Deal Clothier
Completes a Splendid Business Career
of a Quarter of a Centurys duration!

Twenty-five years of successful labor in any occupation is worthy of celebration and observance, if it has been a quarter century of special service to the public accompanied by more than usual success, the larger the propriety of making it a feature all the more worthy of commemoration. Decorah has such an instance. It was on the 31st of March, 1876, that the REPUBLICAN contained the following local notice:

A NEW STORE.
Mr. Benj. Bear, of New York City, has rented the Adams block, corner of Water and Winnebago Streets, and proposes to stock it with a full line of ready made clothing, gents furnishing goods, boots and shoes, hats, caps, etc. He will return from New York, where he has gone to secure his stock of goods, in about ten days. Farther particulars later.
In the late winter or early spring of that year, Mr. Bear made a tour of Iowa searching for a business location for himself. After visiting a number of places he arrived in Decorah about the 20th of March. Upon looking the town over, he became satisfied that here was a field for an exclusive clothing house, that a good store building in the very best portion of the town could be procured, and he decided to make Decorah his home. Whether a residence of twenty-five years or more was contemplated, he alone knows. But that was the beginning of the Centennial Clothing Store. And now at the end of the quarter century he is observing the event with a Twenty-fifth Anniversary Sale, the details, of which will be found on the fifth page.
On the 21st day of April, 1876, we find the following local:
Messrs. Bear & Rose opened the Centennial Clothing Store on Thursday with a full, new stock of clothing, boots, shoes, hats, caps, furnishing goods, etc. Their ad. will be found elsewhere and their store is in the Adams Block, lately kept by Douglas, corner Water and Winnebago Streets. Accompanying this was the first advertisement which Mr. Bear inserted in the REPUBLICAN. WE cannot reproduce the typography, for the type long ago went to the printers receptacle, known technically as the "hell- box,. The substance was as follows, and as displayed filled four inches of space

We are now ready to show our large stock of Ready-Made Clothing, Gents Furnishing Goods. Hats, Caps, Boots. Shoes. &c. We say nothing regarding OUR PRICES, but ask you to favor us with a call and judge for yourself how we are selling goods.
BEAR & ROSE.
Corner Winnebago and Water Sts. Decorah, Iowa.
N R..No trouble to show goods.
l63in
Contrast this with the advertisements which Mr. Bear uses today Mr. Rose, the gentleman then associated with Mr. Bear, was a rich Indianian whoso attention in some way had been attracted to Ben by mutual relatives, and who was ready to back him with his means. For a time the establishment gave no signs of the special characteristics which have made Mr. Bear famous throughout Northeastern Iowa for the business push and enterprise. Rose did not believe in advertising. Neither did he believe in selling gooeds{sp} cheap. He preferred to make large profits on what he did sell, and save all outside expenses of the business. Having the means, he dictated the policy of the firm in this respect for the ensuing two years. Mr. Bear, however, early began making friends and showing the capacity he has possessed of winning customers and keeping them as well. His store became a popular resort for the young people, and in all their enterprises and pleasures he became an active factor. He was a young man at that time, for he was born in Hohebach, Wurtemberg, Germany, in 1853. After the death of his mother, when a mere lad of 13 past, he came in 1867 to New York City, then the El Dorado of all young Germans seeking a fortune. Upon arriving in this country, he secured employment at the munificent salary of $1.00 a week. At the end of nine years, he had so far mastered business methods and the English language that he was the recipient of $30 per week. But that did not satisfy him and he sought a business occupation of his own with results as before stated. In November, 1877, fire consumed the Adams Block but even at that early date, Mr. Bear had so identified himself with local interests that he was treasurer of the Hook and Ladder Co., and he tells it as a joke on himself that he lost what money he had in the pocket in running to and working at this fire. For a time this disaster compelled the removal of the business to the Asseln building where he remained until the completion of the Adams Block on the site he has ever since occupied. Less than one-fourth of the space he now uses was adequate for the stock then needed. His business expanded more rapidly than the town, and enlargement after enlargement took place, the details of which it is not necessary here to repeat. On the 24th of February in the following year, (1879), Mr. Bear saw his way clear to purchase the interest of his partner and engage in business on his own account. Referring to our files of that period we find that his first act was to multiply the space used for advertising from a few inches to a full column of space; and, from that day until this, there never has been a single week that we can remember of in which he has not occupied that or more space in these columns. On an average, not less than two columns per week has satisfied his desire for publicity. As he expanded his advertising, so his business expanded. We do not claim that it was the advertising that did it. But the general features of his management joined to such publicity was what has produced the results at the present time. It was not long ere he was known as the best advertiser in Northeastern Iowa. What he did in newspaper columns he repeated in other lines and no man ever offered him a good thing in the way of publicity but what he responded. No one appreciated more easily the worthlessness of a bogus scheme.
In July, 1884 Mr. Bear married Miss Antonia Homberger, of New York City, and the home was established which ever since has been one of happiness and hospitality. Then, and probably not until then, was Mr. Bear reckoned as absolutely a permanent factor in the business circles of Decorah. What he has been in this respect we need not detail. If there is a public enterprise of any character that has not been actively fostered by Mr. Bear, we do not know what it is. In nearly every enterprise, he has been one of the active pushers and most successful promoters. His energy, judgment and exertions have been of large advantage to the city, and no man has done more to make it what it is than has the young, inexperienced searcher for a location who discovered Decorah in 1876. As a business man, he has been public spirited, entering into every project for the advancement of all public interests, cheerfully bearing his share in all the varied enterprises which were constantly arising. And this is the reason why we esteem the observance of his 25th anniversary an event to be commemorated by an honorable mention such as this is intended to be. 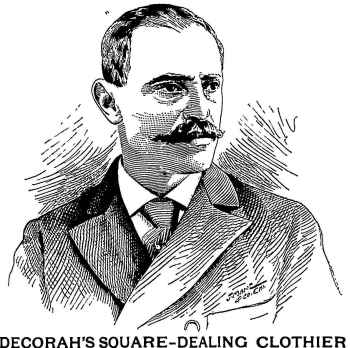