THEY ARE VERY PLEASANTLY ENTERTAINED

Mr. Taylor has been a Resident of Winnebago County for 30 Years

He Came with his Bride from Oneida County, New York, in 1873.

Two representatives of the Republican, a few days ago drove out to the farm of Mr. J.J. Taylor, about 4-1/2 miles from Forest City and spent a pleasant time looking over the place. Mr. & Mrs. Taylor have an elegant home, which is fitted up with all modern improvements, and the guests were cordially received and hospitably entertained. This is one of the finest farms in the section of the state, but to make it so has involved the hard work of more than a quarter of a century. It is a fine example of the pluck and enterprise of these two pioneers of Winnebago county.

Mr. Taylor grew to manhood in the famous old Oneida county, New York, which has been always recognized as one of the best farming counties in the Empire State. In the fall of 1872 he took to himself a bride, and began to cast a longing eye westward doubtless ready to accept Horace Greely's advice, "Go west, young man, go west." With his newly wedded wife Mr. Taylor came to northern Iowa and located on an 80 of a quarter section of wild prairie in Winnebago county located by his father in 1869, the site of the present farm. This land they bought thirty years ago for $4 an acre, but it doubtful if today, an offer of $75 per acre would tempt Mr. Taylor to part with it. This large enhancement of value he thinks is partly due to the many improvements made on the farm, which includes large and commodious buildings and numerous labor-saving utilities, as for instance a washing machine run by the windmill, which works to perfection.

When Mr. and Mrs. Taylor reached this county neighbors were few and far between, there being but two buildings west of them as far as the county line. Those pioneer days brought with them many sacriffices and hard struggles, and hence "the good old days" the poets sing about were not the luxurious kind that people care to live over again.

The old house, 14x14 feet in size, which the young couple occupied as their first home, still stands on the farm, but it has been turned into a general workshop, and thus put to good use a second time. The picture here printed gives a fine view of their present farm home, which has nearly all modern improvements, including hot and cold water throughout, the telephone, rural mail delivery, etc, which gives the farm home all the advantages of city life without city expenses. It is an ideal home in all respects and its latchkey is always out to friends and neighbors.

Coming from "old Oneida," with its heavy timbered forests of thirty odd years ago, Mr. Taylor, could scarcely reconcile himself to the boundless open prairie of his new home, and resolved to plant trees and make the wilderness take upon itself a new life. This tree planting was among his first pioneer work, and a glance at the picture shows how well he succeeded. His home is now surrounded with fine shade trees, which he and his family can sit upon the porch and enjoy life during the warm, summer season. If long years of toil and sacrifice earn for those who struggled a season of peaceful enjoyment, then Mr. and Mrs. Taylor, as they pass through the beautiful sunset of well spent life, should enjoy all the pleasures their beautiful farm house affords. They have four children to sweeten their lives, William, Orra, and Grace being at home, the elder daughter, now Mrs. Nels Nelson, having a home of her own.

This is one of the banner corn raising arms of this section of the state. Not-withstanding the wetness of the past season, which injured the corn crop quite generally, Mr. Taylor raised corn which yielded 87 bushels to the acre, and from 50 acres gathered 3,5000 bushels of the big white and yellow varieties, samples of which can be seen at the Republican office.

Mr. and Mrs. Taylor have been prominently indentified with institute work during the past 8 years, and they take pleasure in giving to other dwellers on the farm the benefit of their practical experience of many years and the knowledge which the dear school experience always affords. The Republican wishes for this happy and prosperous couple a long and pleasant life.

The photo below is a scan of the original photo used in the article. The picture is a very
old picture from a studio print titled "Pleasant View Home" Farm Residence of J.J. Taylor and Family - Forest City, IA. 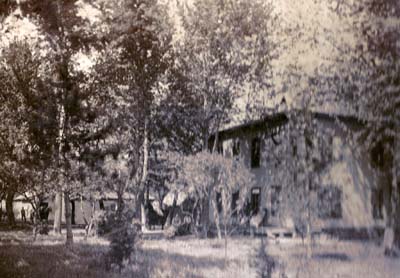