Photo of Four Generations of the M'Canne Family

The family of McCanne is unique among the households of Denver. There are four generations of the male line living, and in the the family of the great grandfather there has never been a death. The head of this patriarchal family is William McCanne, who at his age of 82 is still enjoying life at his ranch at Brighton, Colo.

He was born near Hanstonville, Ky., in 1820. When he was 21 he moved his father's family to Missouri, locating near the present site of Jacksonville, Mo. He worked for his father the next year for $8 per month and earned $100 with which he patented his first eighty acres of land.

The next year he was married and started to make a home on his eighty acres of raw prairie land with one horse, one cow,one pig and a pair of two year old steers as his assets.

Prosperity followed pluck and when the railroad came along in 1858, he furnished the site for the new town, which he named Jacksonville.

The couple raised a family of three sons and two daughters and all are still living.

D.J. McCanne, the eldest son and the grandfather in the group was born in 1850, earned his first silver dollar as a plow boy, handling a yoke of oxen and plow skillfully before he was 9 years of age. He was graduated from Christian University in 1871. He has since followed civil and mechanical engineering as his profession. In 1878 he became associated with B.W. Lewis, who was at that time president of the St. Louis, Kansas City and Northern railway, in railroad construction. He has just completed twenty four years of services as engineer and manager of various companies for Mr. Lewis among them being the water, gas and electric light plants, and the La Veta Hotel in Gunnison, Colo. During the past two years he has been consulting engineer for the Fairbanks, Morse & Co. of this city.

William Gerald McCanne, the father in the group is 24 years of age, a graduate of West Denver High school. He is following the lines of his father in mechanical and electrical engineering, and is at present in the employ of the Denver Sewer Pipe Clay company.

The junior member of the group, William Gerald, Jr., is 6 months old and he is considered by his line of sires as promising a bud for an electrical engineer as Colorado has produced. 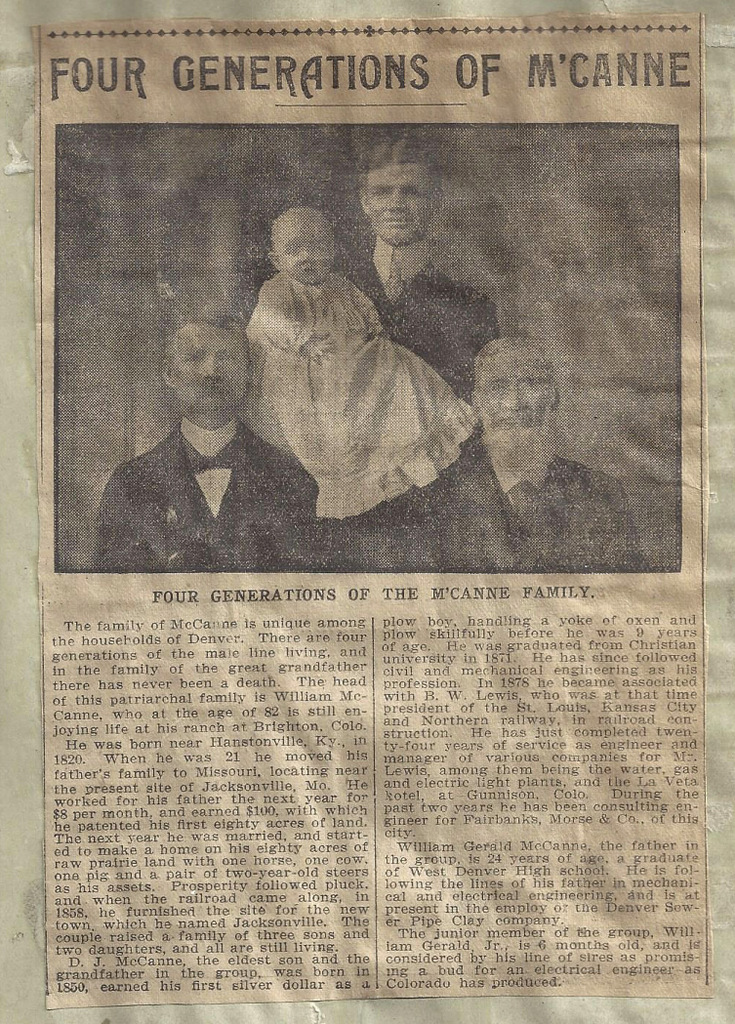