Laryl and Sharon Heitritter live in a comfortable modern house thats in part a century old. The northeast part of their home contains some of the original walls that Laryls grandfathers home had when it was erected on the farm in the 1880s. Several additions have been made to the house through the years, and a complete remodeling project was done 15 years ago.

Thats important because this year, the farm was named as one of the states century farms at the Iowa State Fair on Tuesday, Aug. 23. Laryl and Sharon were not able to attend the presentation because of a family illness, but they will be receiving the plaque honoring the occasion shortly in the mail. The program is sponsored by the Iowa Department of Agriculture and Land Stewardship and the Iowa Farm Bureau Federation.

The farm they live on was originally purchased from a Hull banker in 1883, and was the home of Laryls grandparents until his grandmother passed away. The then newly married Heitritters moved into the house in 1960. The farm has 80 acres which were part of the original farm.

Laryl also owns another 80 acres with his mother, Mrs. Marie Heitritter, which is where his parents farmed, and where he was raised. That farm is north of where he now lives and has been in the family since 1887. It also received the century farm designation this year. That 80 was bought from the Iowa Land Co., and was originally land deeded to the railroad by the government.

The farm has a good chance of staying in the family for at least another generation. The Heitritters oldest son, Steven, is farming now with his father, getting ready to take over the familys land and farming tradition.

[Accompanied by a photo of Laryl and Sharon Heitritter outside their farm house. The caption identifies their two farms as being near Boyden.] 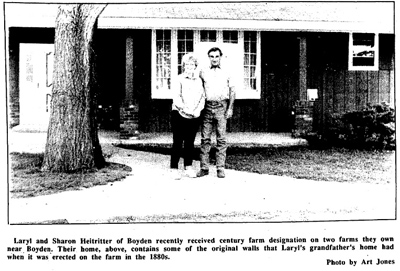