CHILDREN of Wouter Van Rooijen Walter Van Rooyen Obituaries of some of the children listed below can be found on www.iagenweb.org/Sioux under obits.

OBITUARY of Walter Van Rooyen
Source  Published in the Alton Democrat of April 11, 1903
PIONEER GONE
Walter Van Rooyen died at his home in Newkirk last Thursday morning April second at seven oclock. Sixty-eight years ago last October he was born in the historic town of Utrecht Holland where he lived till seventeen years old. When he dropped his spade in the midst of tilling the soil of his native land and announced his determination of setting out for America, his relatives had him examined for insanity. But he left them at that early age and crossed the ocean alone. He landed at New Orleans and came to Pella. Shortly before the rebellion he was married and was soon after drafted. Rather than leave his young wife and babes he hired a substitute for $1700 as many did in those strenuous days.
Four children were born to him of that union of whom two are living today. They are Cornelius and Mrs. John W. Muilenburg at Orange City. His wife dying he married Miss Jennie Muilenburg of Pella and to them there were born at Pella, Hubert now at Hospers and Mrs. Nic Balkema of Sioux Center.
With his family he came to Sioux county thirty-three years ago with the Hospers colony and helped found Orange City. He settled on a fine piece of land northeast of the new town and just south of where he later helped to found Newkirk. Here there were born to him six children. They are John, Jake, Mrs. James Hyink, Henry, Mrs. Ben Hyink, Joseph and one dead. He was one of the first deacons of the first church in Orange City and later an elder continuously till the founding of the church at Newkirk of which he was a charter member and an elder till death.
He was an upright man and the community was the better for his life. Three years ago he and his wife left the farm and established a home in Newkirk. He had been ailing for a year or more and confined to the house several weeks. His funeral Saturday was one of the largest ever seen in Sioux county. He was buried at Newkirk. Source: Alton Democrat, April 11, 1903.

OBItUARY of Jannigje Mrs wouter Van Rooyen 1844-1913
Source: Alton Democrat (5-10-1913)
Birth: July 23, 1844
Death: May 1, 1913
Mrs. Jannigje (Muilenburg) Van Rooyen died at the James Hyink home on Thursday of last week. Mrs. Van Rooyen had suffered with diabetes for about eight years and she succumbed to a severe attack of this disease.
Deceased was born in the Netherlands on July 23rd, 1843 and was therefore 69 years of age when she passed away. When three years old she came to America with her parents.
In August 1866 at Pella, Iowa she was married to Wouter Van Rooyen and three years later, 1869, the pair came to Sioux county, being among the first settlers.
Deceased was the mother of nine chilren, eight of whom survive: Mrs. N. Balkema of Sioux Center, Hubert of Hospers, John of Newkirk, Jacob of Newkirk, Mrs. James Hyank of Hospers, Henry of Newkirk, Mrs. Ben Hyink of Newkirk and Joe of Newkirk. Deceased in also survived by her father, H. Muilenburg of Orange City.
Funeral services were held on Monday afternoon from the Reformed church of Newkirk, Reverend R. S. Douwstra officiating. The funeral was very largely attended.

No family picture was readily available to the submitter. If anyone would like to add a picture, contact our page coordinator and send a jpeg scan to her for submission to this BIOS. 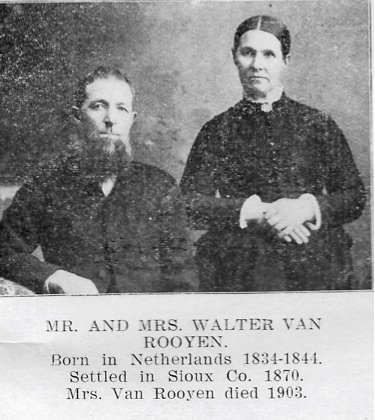