This story was taken from pages 115-116 of the Rock Valley St. Marys Catholic Church Book written for the centennial of the church in about 1982(?). The story was transcribed for this BIOS by Beth De Leeuw of the Greater Sioux County Genealogical Society. Some research notes were added.

JEREMIAH H. LYNCH, born in Kerry County, Ireland, married JULIA FERRITOR in Ireland and emigrated to Ontario Province, Canada about 1845. They lived on a farm in Ontario and later moved to Rock Valley and lived on a farm southwest of Rock Valley. They had eleven children, four of whom are buried in St. Mary Cemetery: Eugene Lynch, Richard Lynch and Joseph Patrick Lynch. Jeremiah Lynch II, his wife, Mary Ann Buckley and their infant son, Jeremiah III are buried there in a separate plot.

JOSEPH PATRICK LYNCH was born in Ontario, Canada, May 9, 1868. His future wife, JULIA JENNIE KINGSTON, was born December 17, 1880 in the village of Skibareen, County Cork, Ireland. The Kingstons emigrated to America, settling near Wayne, Nebraska.

Joseph and Jennie met while working for the government on Indian reservations, Joe as an agricultural expert and Jennie as a home-economics instructor. They were married in Boise, Idaho in 1908.

They moved to the Lynch farm six miles southwest of Rock Valley. Their infant son, Richard, was buried out west. Their two surviving children, John Edward and Josephine were born in Rock Valley.

Joseph and Jennie Lynch were active members of St. Marys Parish. Joe was a Knight of Columbus, an old-time fiddler, a big jovial man who brought his children into town every day to attend St. Marys School - - twenty-four miles a day over dirt roads in the mid and late twenties. Jennie was active in the womens groups, enjoying the card parties and ice cream socials.

Joseph Patrick Lynch died May 7, 1928 and Julia Jennie Kingston Lynch died February 24, 1931. Both were buried from St. Marys and are laid to rest in St. Marys Cemetery in the Lynch plot (near the Scanlan plot).

JOHN EDWARD LYNCH graduated from St. Marys Grade School in 1929 and from Rock Valley High School in 1933. He was born May 11, 1914. He worked as an auto mechanic in Rock Valley until the war. He was not admitted into the service because of a lame foot which required many surgeries in his childhood. He went to San Diego in the early 1940s and worked at Rohr Aircraft. He returned to Rock Valley for a vacation in 1945 and married Catherine De Zoete at St. Marys, September 24, 1945. The couple returned to California and lived there until their deaths. They had three children: Joseph Leo who married Gloria Woodley and they now live in San Diego; Patricia Marie who married Lawrence Levi of Omaha. They now live in San Diego with their three children, Catherine, Christine and Mark. John and Catherines youngest son, William Michael, married Jackolyn Hay and lives in Spring Valley, near San Diego, with their two daughters, Trina and Rebecca.

JOSEPHINE MARY LYNCH was born December 23, 1919. She graduated from St. Marys School in 1933, the last class to be graduated. She moved to LeMars, Iowa to live with relatives, to the Ozarks and eventually to Sioux City, Iowa where she graduated from Cathedral High School in 1937. She attended Briar Cliff College and entered the Sisters of Charity of the Blessed Virgin Mary in Dubuque, Iowa in 1938, receiving the name Sister Mary Realino. She has taught junior high in San Francisco and Stockton, CA, and high school in Patalume, CA, Lincoln, NE, Council Bluffs, IA, Santa Barbara, CA and Glendale, CA. She served as principal-superior at St. Francis High School, Council Bluffs, until it closed in 1965. She is now science teacher and senior moderator at Holy Name High School, Glendale, CA.

MINNIE LYNCH was a younger sister, or perhaps a niece of Joseph Patrick Lynch. She may have lived on the Lynch farm and did teach school for a brief time at the country school on the corner of the Lynch farm in the mid 20s. My recollection is of her living in LeMars where she died and is buried from St. James Church there.

My recollections of St. Marys are warm and enthusiastic. The principals, Sister Delores and Sister Martha, as well as the teachers: Sister Bertilla, Sister Geraldine, Sister Lucian, Sister Domitilla and Sister Chryostom, were lively and very interested in their students. A musical for the 200th anniversary of George Washington (must have been 1932) brings memories of minuets and costumes, powdered wigs and buckled shoes, much of which the Sisters made. Our eighth grade play, Fun in a Chinese Laundry, was presented on a stage in the basement of the church. The pastors, Reverend John OReilly and Reverend August Foerster were very dedicated men. They would visit our classrooms and offer a holy card if we could ask a question they could not answer.

Our eighth grade class was the last to graduate from St. Marys: Edward Pete Tuynman, Charles WaWa Wattawa, Bernard Schemmie Schemmer and Francis Spoochie Beumer were the boys. Jane Fahey, Irene Doherty (Kosters), Dorothie Rainey and Josephine Lynch were the girls. All the boys are dead except Spoochie and Ive lost track of the girls except Irene.

After my parents deaths, I was the ward of my fathers dear friend, Mr. Dennis Scanlan. He was a dear friend to me, a guardian whose opinion and advice I respected. Although I left Rock Valley at the age of 13 in 1933, I have the dearest of memories of it and of St. Marys. When I was there in 1976, I sat in the Lynch pew and remembered all the families and friends and began to realize what tremendous contributions that parish has made to my religious vocation and to my outlook on life. Thank you for this opportunity to share these memories with you!

RESEARCH NOTES : added by Wilma J. Vande Berg
From and family report on ancestry.com (by other than submitter)
Jermiah H. Lynch was born 1806 Kerry County Ireland died 1890 Rock Valley IA. His parents were not given. He married Julia Ferritor born about 1820 Ireland died 2 Jun 1899 Rock Valley IA Her parents were Thomas Ferritter 1785-1855 and Bridget Kelleher 1796-1861. T
Children: Story above relates eleven children born to them. Four of whom are buried in St. Marys Rock Valley.

OBITUARY OF JULIA LYNCH
"Gone, But Not Forgotten."
Mrs. Jeremiah Lynch passed silently to the beautiful beyond last Sunday morning [July 11] about 10 o'clock, Bright's disease being the immediate cause of her death. She ate her breakfast as usual and not feeling very strong retired to her room to rest and sleep a while, when her attendant noticed that her soul quietly and with calm resignation was going to its maker.
Mrs. Lynch was born in the county Kerry, Ireland, 74 years ago, her maiden name being Julia Ferritor. She was married at the age of 20, and four years later with her husband moved to Canada, where she resided for 40 years. About 10 years ago her two sons, Jerry and Joseph, took up their abode in Sioux county, where she resided until her death. She was the mother of 13 children, and four boys and three girls survive her.
The deceased was a faithful Catholic and a Christian mother, and her life was spent in doing good to all. The funeral occurred Tuesday from St. Mary's church, when Father Phelen said requiem mass for the departed, and her body was interred in the Catholic cemetery.
Source: Rock Valley Register, July 17, 1896.
* * * * * * * * * *
The Sioux County Cemetery Index has "Lynch, Julia, b. 1826 d. 1896 St. Marys Cem Rock Valley IA." This would make her 70, rather than 74, at the time of her death. The index also has "Lynch, Jeremiah, b. 1806 d. 1890 w: Julia St. Marys Cem Rock Valley IA."
The Rock Valley Register of July 24, 1896, includes a news note from the Maurice Banner that John Lynch and wife, along with P. H. Moran and wife and Will and Hugh McDonald, were at Rock Valley to attend the funeral of Mr. Lynch's mother.

The Life Summary of Joseph Patrick Lynch
When Joseph Patrick Lynch was born on 9 May 1868, in Arthur, Wellington, Ontario, Canada, his father, Jeremiah Lynch, was 62 and his mother, Julia Ferritor, was 47. He had at least 1 son and 1 daughter with Jennie Kingston. He died on 7 May 1928, in Rock Valley, Sioux, Iowa, United States, at the age of 59.

OBITUARY of Joseph Lynch
Source: Rock Valley Bee (5-11-1928)
Born: 1868
Died: 1928
Joseph P. Lynch passed away Monday morning at the Le Mars Hospital where he had gone a few weeks ago for treatment, his death being due to pernicious anemia. Mr. Lynch had not been well for several months. He was in the hospital at Rochester for a time and later he went to Sioux City, where he spent a few weeks, later returning to his home near Rock Valley, and from here going to the hospital at Le Mars.
Mr. Lynch is a pioneer resident of this vicinity, having lived on a farm near Rock Valley during the greater part of his life. He was born in Canada and came to Iowa with his parents in his youth. He was a kind and generous man and a man who was greatly respected and admired by his neighbors and friends.
Besides other relatives, Mr. Joseph Lynch is survived by his wife, Jennie (Kingston) Lynch and two children, John and Josephine. Mr. Lynch is sixty-two years old.
Funeral services were held in St. Marys Church in Rock Valley Wednesday morning. A large number of friends and neighbors were present to pay their last respects and to extend sympathy to the bereaved wife and children.

OBITUARY of Jennie Lynch (Mrs. Joseph)
Source: Rock Valley Bee (2-27-1931)
Born: December 17, 1880
Died: 1931
MRS. JENNIE LYNCH PASSED AWAY TUESDAY MORNING
Mrs. Jennie Lynch passed away in her home in Rock Valley Tuesday morning, following a lingering illness of long duration.
Mrs. Lynch was born in Ireland December 17, 1880. When she was about six months old she came with her parents to this country. They located at Allen, Nebraska, where she grew to womanhood. She was united in marriage with Joseph Lynch in the year of 1909 in Montana. Shortly after their marriage they moved onto a farm southwest of Rock Valley where they lived until the death of Mr. Lynch almost three years ago. Later Mrs. Lynch moved to Rock Valley.
Mrs. Lynch is survived by two children, John and Josephine, who were still at home with their mother. She also leaves five brothers and two sisters.
Funeral services were held Thursday morning in St. Marys Church. Among the relatives from a distance who attended the services were Mr. and Mrs. Clover, of Pender, Nebraska, Mr. and Mrs. Delmer Wharton, of Allen, Nebraska and her brother, James Kingston, of Wayne, Nebraska.

Pictured are Joseph and Jennie Lynch from the St. Marys church book. 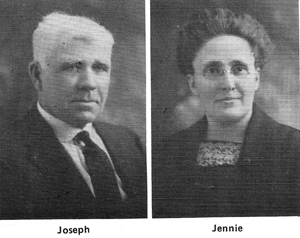