The Hall of Fame Banquet and Induction Ceremony will take place next fall as part of the homecoming week festivities. Watch the Record-News for further details.

The Mount Ayr Community Schools Hall of Fame was established to create a lasting tribute to groups and individuals who have brought honor to themselves, their schools and their communities.

The Hall seeks to recognize those who have accomplished extraordinary feats in extra-curricular activities, those who have made significant contributions to the school, and alumni who have distinguished themselves in life after high school.

Individuals and groups from any school which is now part of the Mount Ayr Community district are eligible for selection to the Hall of Fame.

The committee relies on nominations submitted by the public. To learn how you may submit nominations, please contact the school or the Mount Ayr Record-News.

They were a true "undefeated team" as they won every regular season meet, the district meet, and the state meet.

Extremely competitive and able to deliver their best when it was needed, they set three school records and place in six individual events at the state meet.

In the shot put, Kim McGinnis topped her best throw of the year by nearly two feet to take first place.

Dawn Huff finished second in the long jump and third in the 100m hurdles.

Three relay teams also qualified for the state meet but did not place.

Lawton-Bronson trailed Mount Ayr by just one point heading into the final event, and with the fastest qualifying time it looked like they would edge the Raiderettes. However, a mishap on the first exchange kept Lawton-Bronson from scoring any points, and after a 45-minute delay to check the scoring, the Raiderettes were declared the state champions.

The team was coached by Dave Still and Mark Larsen, both members of the Mount Ayr Community Hall of Fame.

Maurice Carr was born in Beaconsfield in 1911 and moved to Maloy in 1926. Living across the street from the school, he spent many hours in the gym perfecting his jump shot.

Carr played on Maloy basketball teams that won the county tournament in 1929 and 1930. The 1930 team qualified for the state tournament with a record of 27-0 but were eliminated by Newton.

Carr went on to star at the Iowa State Teachers College (now UNI), where he was a three-year starter. He led his team in scoring, was named Most Valuable Player in 1935 and was twice named to the all-conference team. He was regarded as the "best guard in the Midwest" as a senior.

After graduation in 1935, Carr returned to Maloy as a teacher and basketball coach. In his first year he led his team to the state tournament where they were eliminated by Ottumwa. Maloy made it back to state the following year but were defeated in the first round by Marshalltown.

Carr enlisted in the Army in 1942. After his discharge, he came back to teach and coach at Redding, later returning to Maloy.

During his 18 years at Maloy and Redding, his teams never had a losing season, compiling [Page 9] a record of 329 wins and 77 losses.

Carr was hired to coach basketball in Mount Ayr in 1955, but ill health forced him out of coaching.

He was inducted into the Iowa Basketball Coaches Hall of Fame in 1981.

As an administrator, he was one of the key figures in the reorganization of the Mount Ayr Community School District and was recognized by many as a "peacemaker" during that sometimes tumultuous process.

During his career he supervised several of the outlying elementary schools and was highly respected by students and staff alike.

Carr served as assistant superintendent and director of transportation, and retired from Mount Ayr Schools in 1975. He passed away in 1985 at his winter home in Arizona.

While at Berkley, she was part of a research team that isolated the genetic defect for breast cancer, and her post-doctoral research at Cambridge expanded her study of breast cancer genetics.

She began her career in breast cancer treatment research at Exelixis in 1988, where she served as Oncology Program Leader, Senior Research Scientist, and later advanced to become Director of Signal Transduction Research.

In 2004 she moved to Genentech, one of the world's leading biotechnology companies. She has held a number of positions at Genentech and is currently the Senior Director of Translational Oncology.

Friedman has published 77 peer-reviewed manuscripts, and she is an inventor, with 20 issued patents relating to cancer research.

She is regarded as one of the top experts in her field and is broadly sought as a mentor by aspiring scientists.

She serves on the Scientific Advisory Board at the Cambridge Cancer Center, and she heads the Women in Science and Engineering Team at Genentech.

She is the recipient of numerous professional awards and academic fellowships, including the 2014 Health-care Businesswomen's Association Rising Star Award.

Landphair is a 1968 graduate of Mount Ayr Community School.

After receiving his education degree, he began teaching and coaching at Clear Lake. He then moved to Central Decatur, where he coached many state wrestling qualifiers and one state champion.

Landphair returned to Mount Ayr in 1980 as an industrial arts teacher and assistant wrestling coach with Ron Scott. He taught many different industrial arts courses but was especially renowned for his building trades and drafting classes. Students in his classes built houses, designed commercial buildings and school additions, and restored local landmarks.

Landphair played an active role in shaping the future of industrial arts through his long-time involvement in the Iowa Industrial Technology Education Association.

At the urging of his daughter Nicole, he agreed to revive the school's dormant cross country program, and his cross country teams won nine Pride of Iowa Conference championships and qualified for state 10 times.

(Nicole is a member of the 1988 Girls track team that is also being inducted this year.)

After retiring from the school in 2006, he has been an active volunteer throughout the community. His signature project in retirement was refurbishing and restoring the Princess Theater.

Landphair still makes a regular swing through the industrial arts classes to take a look at the latest projects, to offer his assistance, or just to check in to see how things are going.

He continues to lend his expertise and assistance with track and cross county, and he and his wife Martha are fixtures at both school and community events.

Landphair is universally respected and admired by former students, athletes, and colleagues for the many life lessons that he taught as well as his integrity, and his tremendous dedication to our school and community. 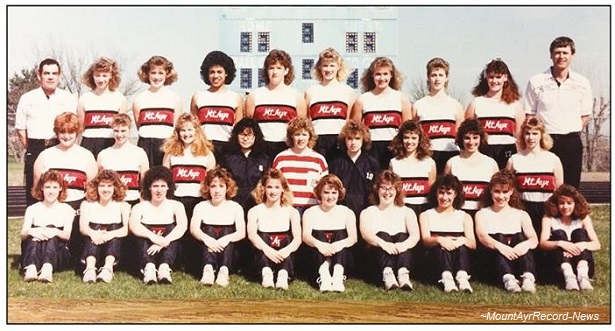