Darla Sobotka can be seen, camera in hand, around Ringgold County school events, almost every night of the week. Some even nickname her the "paparazzi," because on any occasion, you can spot her right in the middle of the action, snapping pictures. "I thought when my kids graduated, I would stay home more often, but then I got busier because I started to attend more events than I ever had before," Darla reflected on her photography.

Darla was born in Creston, Iowa, and was raised on a farm near Diagonal, Iowa. She received her Master's Degree from Northwest Missouri State University in Maryville, Missouri. She is married to Gary Sobotka and has four children: Alex, Matt, Cody, and Rachel. Her family has now expanded to a daughter-in-law, a son-in-law, as well as three grandchildren, and another one on the way! Darla has been a teacher at Mount Ayr Elementary since 1990, and has taught third grade all but one of those years. "I've always wanted to teach. I enjoy third grade because the children are passionate about learning, and are starting to grow up. I am very fortunate to have taught third grade for a long time," said Darla when asked why she chose this grade to teach many years ago.

Darla started taking photos when her kids were in high school. During this time, cameras weren't as high tech as they are now. She remembers trying to take pictures of Matt running hurdles, while using a film camera, and back then, she didn't have it mastered that to take action shots you have to start taking the picture before they get to the hurdle. "I never got any hurdle pictures with Matt in them, because I always clicked too late, and all I got was a picture of a hurdle," she laughed.

Depending on the season, two to three nights per week, Darla captures the important moments for student athletes at both Mount Ayr and Diagonal High School events. Each event she snaps around 2,000 pictures, and then goes home and spends 2-3 hours editing and picking which pictures are well enough to publish. She only keeps around 10% of the pictures she takes. She has around 250,000 pictures on Snapfish for people to order, and if this is only 10% of the pictures she has taken, you can about imagine the millions of photos she had discarded! The amount of time that Darla spends uploading these pictures is very much appreciated by parents, students, coaches, and others in the community.

Her favorite sport to photograph is football, because she enjoys all the action shots. She always enjoys capturing track meets because of the emotions shown in the pictures through the races. She shared that volleyball is her hardest sport to photograph, because it is hard to get the ball in the picture because it is usually moving so quickly and it is often hard to get a clear picture. The most intriguing events she has ever photographed are State Football at the Dome, State Basketball, and State Track. She especially enjoyed taking pictures the year the boys became State Champions in Track. She shared, "I wouldn't normally have been able to be that close. It truly puts the event at a whole new perspective when you are down on the field court, or track."

At the beginning of this passion taking flight, she mostly took pictures of her own children. When she realized how much the pictures meant to relatives who can't always be at the sporting events, parents who don't always bring a camera, and alumni from Mount Ayr, it encouraged her to keep taking [Page 9] then and sharing them on Facebook. In saying this, Darla was a little teary-eyed, and sharing from experience, I have relatives who don't live in Iowa. For Darla to share those pictures, and have my loved ones be able to keep up with my athletics means so much a lot to my peers, too. Darla has a large part in keeping everyone connected through her photographs.

In the future, Darla will continue to take pictures of her grandchildren, and even wants to travel with her husband to take pictures of new places as well as things in nature. We appreciate Darla using her free time to caption our most precious moments of high school. Whether it is a play, sports, band, choir, banquets, Sparks, Homecoming or other events in Ringgold County, you can find Darla there with a smile on her face, ready to snap pictures so that we can remember the special times we have. Darla is a person of good character, and generosity, and we can't thank her enough for everything she does for our schools. 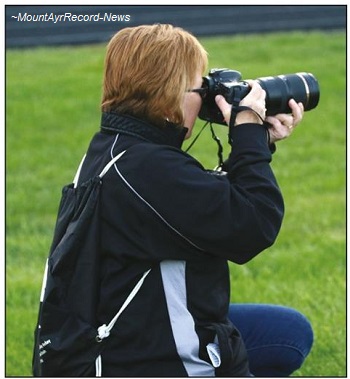