The Mount Ayr Record News of February 11, 2016 announced the Mount Ayr Community School's Hall of Fame inductees. They are: Dr. David McDaniel, Dr. Bruce and Michell Ricker (both Class of 75!), Orr Fisher, and Ron Scott. I remember the last time I saw Mr. Scott. I was coming out of Jamie's Coffee Mill and Ron was just going in. He wasn't just a great coach and teacher, he was a great man.

Now I get to put on my "old timers committee" hat and point out some folks who we might not know.

Etta Rider was the daughter of Dr. and Mr. Robert Rider and was born in 1859 in Illinois. After teaching at Mount Ayr High School in the 1890s, she was elected Ringgold County Superintendent of Schools in 1909 and served until 1915. Miss Rider then returned to teaching at Mount Ayr until 1932. She was involved with many groups and organizations that sought to benefit the community.

Floy Reed Bliss was born in Illinois in 1885 and graduated from Mount Ayr High School in 1902. Floy taught school after graduating and then attended Simpson College, graduating in 1910. She served as principal of Mount Ayr High School after college and married John Bliss in [June 15] 1916. Mrs. Bliss resumed teaching in 1923 and continued in this capacity until 1955. She, too, was involved in many benevolent organizations over the years.

Dr. Charles Lawhead was born to Dr. Carlton (a dentist) and Ferrah Lawhead in Mount Ayr in [July 13] 1920 and graduated from Mount Ayr High School in 1938. He served in the U. S. Army during World War II and returned to Mount Ayr in 1946 to begin his career in dentistry with his father, Dr. Carlton Lawhead. Charles had a tremendous love of God, country, church, school, music, sports, and family. The activities and organizations he was invovled in are too numerous to mention. Dr. Lawhead was joined by his son Dr. Collus Lawhead, in his dental practice in the mid-1970s. Another son, Carlin, also became a dentist.

X. T. Prentis graduated from Mount Ayr High School in 1917 and served in the army during World War I. He married Glady Tennant in 1919 and they had four children. X. T. started Prentis Hatchery in 1924 and by 1928 he had hatcheries in Leon and Bedford. Mr. Prentis later became a member of the Iowa House of Representatives, a State Senator, and held numerous positions in poultry associations. Improving Ringgold County highways was of particular concern to X. T. Prentis.

Dr. Gerald Leiser Downie graduated from Mount Ayr High School in 1922. He attended college at Simpson and then the University of Iowa followed by Northwestern. He married Maurine Hurtz in 1933 and they had three children. Dr. Downie served as a Methodist Missionary in China for twenty years, erecting a hospital there. He then served two years in India and briefly in other countires before returning to the states and settling in Illinois.

Transcriber's Note: Dr. Downie was born in Mount Ayr on July 1903, and died on November 7, 2000 at Provena Heritage Village, Kankakee, Illinois. He was interred at Mound Grove Gardens Cemetery.

You know, folks, this list is endless. I hope that hall is really big because we could easily fill any large hall. 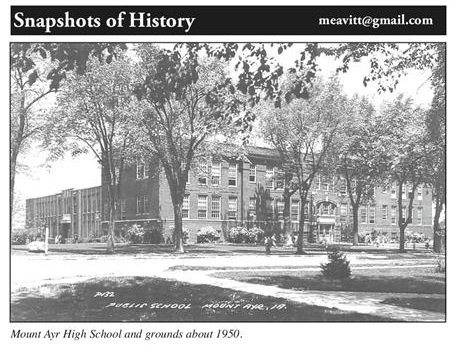