On a national basis, the state of Iowa is not widely known as a hotbed of rock 'n roll music, but most Iowans know rock music has a long history in the state. In fact, Iowa's rock history even extends all the way into Ringgold County as one Mount Ayr graduate has been inducted into the Iowa Rock 'n Roll Hall of Fame not once but twice.

This year Carey Crowson, a 1972 Mount Ayr graduate, was honored with inclusion in the Rock Hall of Fame for his individual accomplishments in the music industry over the past 40 years, and according to his Hall of Fame biography, "dedication to making music special for all Iowans and beyond."

This individual honor marked Crowson's second induction into the Hall of Fame as he had also been among band members recognized in 2001 when the Cavaliers band was inducted into the Hall as a group.

Crowson first performed in the Des Moines area in 1977 as part of the duo Jackson/Crowson. Over the years Crowson has been a member of many local bands including Backfire, Cactus Killers and Uncle Walt. He joined the Cavaliers in 1984 and played off-and-on with them until they disbanded in 1995. Since 2000 Crowson has often appeared with fellow Hall-of-Famer Tony Valdez.

During his career Crowson has opened for some of the biggest acts in rock music, including the Young Rascals, Del Shannon, Peter Noone (Herman of Herman's Hermits), Fabian, Blood Sweat and Tears and the Monkees.

Besides public performance, Crowson has written and sung jingles and promotional songs for a wide variety of regional and national companies, including McDonald's, Disney, the Iowa State Fair, Adventureland, Farm Bureau Insurance, Fareway grocery stores, Joseph's Jewelry and the Woodsmith Store as well as several local banks, fertilizer companies and insurance companies. Not only does he sing for commercials, but he also writes and arranges the background music for some of them. He has also has been hired to arrange, play the music and singe background vocals for other artists on their recordings.

Today, Crowson and his wife Lana [Sickels], a 1972 Mount Ayr graduate, live in Ankeny where they own and operate Crowson Piano Service, [Page 2] a business they began in 1974. Their son Michael joined the business in 1996. The Crowsons restore upright and grand pianos and tune and service pianos in music stores, churches, schools, universities, performance venues and thousands of private homes throughout the state. They have completed high-level restoration projects for clients from California to Illinois to Texas. Some of their high-visibility restorations in Iowa can be found in the Governor's Mansion carriage house, Living History Farms and Hoyt Sherman auditorium.

In addition to their full-time business, Carey and Lana serve as Directors of Music Ministry at Hope Lutheran Church in East Des Moines.

NOTES from Steve Duros and Bob Ricker: Carey played the piano when we were in school. Carey and Tony Valdez (Des Moines) played with the Cavaliers. Tony also played with the Echoes V. 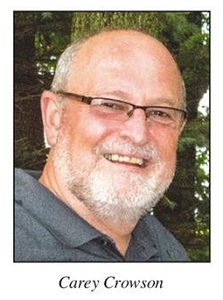