Mr. and Mrs. Earl Love who live at 20 2nd Avenue Northwest in Le Mars will observe their 25th wedding anniversary on Sunday, April 9, 1961.
Open house will be held from 2 to 5 p.m. at the Plymouth Presbyterian Church parlors located eight (8) miles west of Le Mars and two miles north.
The couple also will hold open house at their home in Le Mars in the evening from 7 to 9 p.m.
No invitations have been sent but friends and relatives are invited to call either of these times.

Mr. and Mrs. Earl Love of Le Mars, 2nd Ave. northeast observed their 25th wedding anniversary by holding Open House at the Plymouth Presbyterian Church of which they are members, from 2 until 4:30, and in the evening they held Open House at their home in Le Mars.
Mr. and Mrs. Love were assisted in receiving their guests by Mr. and Mrs. Darrell Rhodes of Genoa, Illinois.
Mrs. Willis Harms of Sioux City and Mrs. Dean Rowe ushered.
A musical program was arranged by Mrs. William H. Timmins. Piano solos were given by Gloria and Patricia Harms of Sioux City and Ruth Ewers.
Mike Frolkey of Rossie played a solo on the French horn, his sister Carol, accompanied him.
A duet was sung by Mary and Margaret Stephens; Dean Rowe sang two numbers. Mrs. Timmins was their accompanist.
The Rev. Charles Kruse minister of the Plymouth Church gave a short talk and closed the program with prayer.
The guests were registered by Mrs. Rhodes, Mrs. Nathan Frolkey of Rossie and Mrs. Reuben Vregdenhil displayed the gifts.
Mrs. Henry Eilks poured from a table centered with a wedding cake, lighted tapers and pink and white chrysanthemums.
Mrs. Milton Atkinson of Merrill and Mrs. Lyle Stephens served the punch.
Mrs. Bertsel Brown, Mrs. Harlan Rowe, Mrs. Foster Rowe and Mrs. Lloyd Ewers assisted the Plymouth Ladles in serving the guests.
In the evening many Le Mars friends called at their home to congratulate them. Mrs. Darrell Rhodes poured.
The church parlors and their home was decorated in Easter Lilies, tulips, glads and potted plants the gifts of friends.
Mr. and Mrs. Love received many gifts, cards and congratulatory messages. 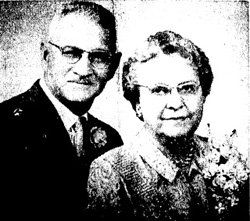