In 1918 they moved to Orange City where, in 1923, Emma graduated from high school. She attended Cedar Falls Teachers College and decided to accept a school in Polk City, Iowa, that fall. The next school year she obtained a school closer to her home area, Fredonia # 5 (Center School). She taught there 1924-1927.

Emma married Nis Kloster of the Oyens community on February 15, 1928. They farmed and raised 6 children in Fredonia Township. In the early 1950s Emma decided to continue her education and began teaching again in area schools. These schools included Struble, Fredonia # 1 and Seney.  She taught at these schools until she retired.  Following retirement she continued to live on and manage her farm. 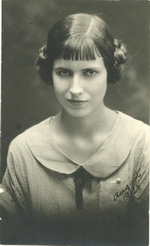