Mrs. Milton (Vera) Atkinson of Merrill has been designated a Merit Mother of Iowa for 1975, according to Lucille Mitchem of Marshalltown, President of the Iowa Mothers Assn.

She was sponsored for this honor by the Plymouth County Farm Bureau women and was one of 17 mothers who were successfully nominated to be considered for Mother of the Year.

Jean Willis, wife of Ned Willis of Perry, mother of four children and speech clinician in the Perry school areas, was chosen Iowa Mother of 1975.

Vera, the daughter of George and Sarah Gabel, was born on a farm near Akron. She received her elementary education in a 1-room country school in Johnson Township and graduated from LeMars high school in 1924.

After teaching one year she was married to Milton E. Atkinson, June 9, 1925. They will observe their Golden wedding anniversary this year.

The Atkinsons lived in Wisconsin a short time after their marriage and then returned to Iowa to farm.

In 1969, Vera and Milton built a new home and retired on a portion of the family farm, but both are still very active in their many and varied activities.

Throughout the years, Vera has been a faithful member and worker at Plymouth Presbyterian Church. She has willingly served in all areas of the program, pianist, Sunday School teacher, superintendent, youth sponsor, womens organization and committees.

Many have been the organizations and committee activities that have benefited from her knowledge and untiring efforts.

Plymouth County Farm Bureau is one of these. Vera has served in some township or county office or committee since 1946. She was county womens chairman in 1959-60.

Vera has actively supported and worked in the Republican party, holding some office in the womens program since 1954. She presently serves as district treasurer.

She has donated many hours to the American Cancer society, Plymouth County extension council, was named Plymouth County Rural Homemaker in 1958 and helped with many community projects.

She has been a capable delegate on the local, state and national levels for some of these organizations. 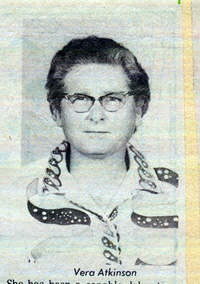