Lafe Gardner was so capable. He was a native of Kalamazoo Co., Michigan. He was in a performing trio. He and Perry Sager on violins, and Emery Sager, on cello, extremely popular in the Hinton, James, Kingsley and Moville, Iowa communities.

He served as the Lincoln Twp. auctioneer and negotiator. He did blacksmith work and farmed. He was postmaster for the district. He would bring mail from James Station post office and LeMars to the Lincoln Twp. settlement and surrounding area. There was a small building on the Lincoln and Stanton Twp. line near Neptune called Vogt, the route name for J. F. Vogt, early LeMars postmaster.

Lafe began this route in 1891, after Harrisonville store no longer had the mail route come directly from James. And he continued until 1895. 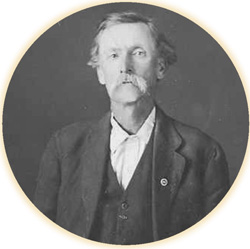