A joint Graveside Service will be held at 3:00 p.m., on Friday, May 6, 2022, at St. Clair Township Cemetery of Ute, Iowa. Rev. Nathan Peitsch will officiate. Military Rites will be conducted by the VFW Post No. 5605 and the Aaby Post No. 442 of the American Legion of Ute, Iowa.

The Armstrong - Van Houten Funeral Home of Ute, Iowa, are in charge of the funeral arrangements.

Terry was born on July 21, 1953, in Denison, Iowa, the son of James John August and Donna Mae (Bretthauer) Watke. He was baptized and confirmed at the St. Paul Lutheran Church of Ute, Iowa. After graduating from Charter Oak-Ute High School in 1972, he joined the Air Force and served his country for three years. During this time, he was very proud of his work on the Titan II missile.

Following his honorable discharge he attended the Climate Control Institute in Wichita, Kansas, where he received degrees in Heating-Refrigeration-Air Conditioning and Solar Installation Maintenance. He then attended Western Iowa Tech Community College in Sioux City, Iowa, where he received a diploma in Electronics Systems Maintenance. Terry put this education to use working for civilian contractors in Nevada and California. While in California Terry studied at Cerro Coso Community College, earning certification for RADAR engineering which led to his working at China Lake Naval Air Weapon Base in California.

While working in Ridgecrest, California, in 1997 Terry met Maria Louise Kaip. They were joined in marriage on September 11, 1999. After their marriage the couple continued to move around the country living in Des Moines, Iowa, Ute, Iowa, Ocala, Florida, then returning to Ute to settle near his family.

Terry loved fishing, listening to music, tinkering with old engines, and making strangers into friends. He had the gift of bringing laughter into peoples lives. 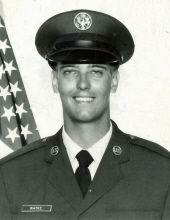