Dennis Lee Crismon, 72, of Onawa, Iowa passed away Saturday, April 2, 2022 at his residence, surrounded by his family.

A private family celebration of life service will be held. Arrangements are under the direction of Goslar Funeral Home and Monuments, Onawa, Iowa.

Dennis Lee was born October 4, 1949 in Doniphan, Missouri, the son of Bill and Lillian (Faughn) Crismon.

Dennis and Linda Thompson were united into marriage January 18, 1969 in Long Beach, California.

Dennis was over the road truck driver. He was an all-around tinkerer and hard worker. Dennis enjoyed model remote control airplanes, and spending time with his wife, Linda. Dennis had a sense of humor and loved his family very much. He was a great father and grandfather to his children and grandchildren. 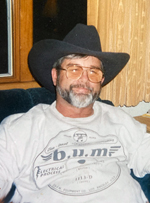