Charles Sweatt, son of Dr. William and Zilpha (Baxter) Sweatt, was born in Norwich, Vermont, May 30, 1832, and died in Minneapolis, Minnesota, January 27, 1903. In 1837 his parents removed to Thetford, Vermont, where he attended the Thetford Academy. He entered the Preparatory department of the University in 1845, and remained two years. He then entered the Scientific department, where he remained one year.

He was in the employ of Morrill J. Walker, Union Village, Thetford, 1848-1851; Alonzo George, Post Mills, 1851-1853; Baxter and Hall, Derby Line, 1853-1854. In 1854, he located in West Mitchell, Mitchell county, Iowa, and formed a partnership with his elder brother, John Sweatt, in conducting an extensive mercantile and real estate business.

He was married on January 1, 1865, at Mitchell, Iowa, to Cornelia Elizabeth Lyons, a native of New York, who died March 20, 1904. They had one child, a son, William Richard, a graduate of the Shattuck Military Academy, Faribault, Minnesota, now president of the Electric Heat Regulator Co., Minneapolis.

The following is from the library at Norwich University. See Link at bottom of this biography page.

William Sweatt served as Norwich University trustee from 1834 to 1850. He had moved from his native New Hampshire to Norwich in 1820 and then to Thetford, VT, in 1837. Dr. Sweatt served as university medical examiner for some time and as an assistant surgeon during the War of 1812. Like his son, William Sweatt was involved in real estate transactions in the mid-west.

About Charles Sweatt -- Charles Sweatt entered Norwich University in 1845 and remained two or three years. He later moved to West Mitchell, Iowa, where he engaged in mercantile pursuits and subsequently established a bank. In 1878, he moved to Fargo, North Dakota, and established the banking firm of Charles Sweatt and Company. He married Cornelia Lyons (d.1904) in 1865 and the couple had one son. The control file included with the collection contains additional biographical information on Charles Sweatt and his family. Search Terms The following subjects are represented in this collection.

Sweatt, Charles -- Correspondence. Access Restrictions The collection is open. Preferred Citation Many items in the University Archives are one-of-a-kind resources that are not likely to be available anywhere but here. For this reason, forming citations for archival sources is a little different than for books and periodicals. If you need to cite anything from this collection, follow the format below: Identification of specific item; Date (if known); Charles Sweatt Papers, Box and/or Folder and/or Item Identification; Norwich University Archives, Kreitzberg Library, Northfield, VT. Heres an example from the collection: Letter from Charles Sweatt to his parents, 28 October 1865. Charles Sweatt Papers, Norwich University Archives, Kreitzberg Library, Northfield, VT. Additional Information Extent: 1 Box (.25 linear feet) Collection Location: Archives 501 Language(s) of

The above information (#1 & #2) was provided to IAGenWeb/Mitchell county, by:

The following are excerpts from the book "History of Mitch and Worth Counties Iowa, 1873."
Page - 363 - (Regarding Mitchell township). During 1855 but few came in for settlement, among whom were: John and Charles Sweatt -------

Page - 371 - The exchange bank was estalished at West Mitchell, the the spring of 1872 , under the name of Sweatt & Prime. In 1878 Mr. Prime purchased the interest held by Mr. Sweatt and continued the banking interest there until 1880, when he move to the depot. . . .

Page 372 - (from bio for Mr. C. S. Prime) After resting one year he engaged with Mr. Charles Sweat in the banking and real estate business, which business he continuous as successor to the banking firm of Sweat & Prime.

Page 374 - (under the heading of West Mitchell). The first general store was opened by John D. Chambers and John Sweatt in 1855. In 1856 Mr. Chanbers sold his interest to Charles Sweat. This store wa kept in a frame guilding, 18x26 feet, erected for the purpose, The goods were brought from Rock Co. Wis. by teams. Messrs. Sweatt & Sweatt remained to in trade until 1870, when they sold to William and Frederick Sweatt, their brothers. Shortly after this Charles Sweat engaged in the banking and real estate business, which he was still following in Dakota in 1883. 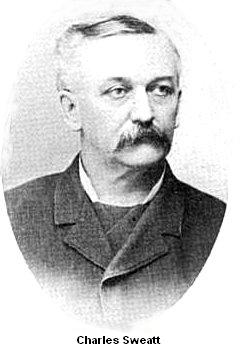