Clara Romana Turner was born September 21, 1870, Mills County, Iowa. She is the daughter of Elizabeth Ellen Gowens born March 17, 1838, died September 29, 1880, and Freelove Turner born November 10, 1839, died December 28, 1922. Elizabeth Ellen was born in Kentucky, Freelove born in England. Elizabeth and Freelove went to school in St. Mary's and occasionally crossed the river by steam ferry at Bethlehem, across from Plattsmouth, Nebraska. Both St. Mary's and Bethlehem have vanished from the river side.

Elizabeth and Freelove were married November 20 1859, Mills County, Iowa. They had eight children, Mary Frances, Henry, Dora, George, Clara, Alice, Carl and Eva. Clara was born by Pony Creek, Mills County in a large log house. In 1880, the Missouri River rose far above its banks flooding from bluff to bluff. At the time, her mother Elizabeth and her brother George died from typhoid fever. Clara, then, became responsible for helping out more with the chores. She was 10 years old. She milked cows, slopped hogs, cared for the chickens and gathered eggs. Then, there were no special reports that measured the depth of the Mighty Missouri River. A neighbor would pass by and say "She's comin". The family would wait until the water would get to the house, and then they pulled the bow of the boat right into the kitchen, loaded the cook stove and children on board and rowed to higher ground.

Clara and Daniel lived in the bottomlands of St. Mary's Township and was still close neighbor to the river. Eureka School was usually a safe place to wait out a flood. At other times, neighbors welcomed the family into their homes. In the days of vast distances between farm homes and the scarcity of rural doctors, Clara served her neighbors, as needed. She once said she replaced the severed finger of a neighbor child that had been amputated in an accident. She proudly said "The finger grew back." She assisted in the delivery of babies, as late as 1922. One story, she told was of delivering a baby to a family named "Minor" As someone went to get the doctor, another came to get Clara. Clara delivered the baby and had it dressed by the time the doctor arrived.

Clara worked very hard as a young wife and mother. While Daniel worked for a farmer, Clara was responsible for the household duties, or whatever the farmers wife desired. One day while Clara was cooking the noonday meal, a vagrant came to the kitchen door, asking for a hand-out. She told him there was nothing prepared yet, and that he should leave. He ignored her and was insistent that she give him some food. He opened the screen door, and barged into the kitchen. The farmer's wife was sitting in the living room, unknown to the vagrant. When he entered the kitchen, demanding food, she got up out of her rocking chair, lifted her apron, and pulled out a 45. She told him "he best get on his way". He went through the screen door, as fast he could go. Clara had know her employer carried this gun around her waist at all times, had never seen it pulled out or used.!!

Clara and Daniel moved onto a farm owned by brother-in-law Marlin Young. There Clara raised ducks. There was a slough nearby, perfect place for ducks. She raised 100, at a time. One day a buyer came by and offered .25 for each. Clara told him she wouldn't sell for that price, the local butcher would pay that much, and she would also be given the feathers. She made the family's pillows and comforters from these feathers.

Daniel raised horses for farm use, he bred and sold them. At the time there were men who traveled the states with a stallion used for breeding, and Daniel was charged a fee for services to breed his mares. Clara and Daniel had a cow, Clara was the only one who ever milked the cow. One day, for some reason, either she was sick or had just given birth to Frances, was unable to do it. Christopher was sent to milk the cow--no matter what he did he could not get near her. Clara had him put on one of her dresses, and a bonnet. He went up to the cow, no problem, he was able to milk her. Smart Cow!!! Daniel kept a pipe in his mouth at all times, the stem had burned through, causing an open sore. A cancer developed on his lip. It spread to his mouth and throat, to the jugular. He died December 7, 1907, Clara was left with 5 children, the oldest 18, and Frances just 3 years old. The farm they had purchased to live on was lost because of Daniel's medical costs. Clara supported her family by raising garden crops. She, at one time, had 2 acres of onions, which she and the children took care of. They prepared the ground, set out the onions, weeded, etc. While Daniel was alive, the onion crops were taken to Omaha and sold at market. After his death she sold to a buyer who came from Kansas City and bought the whole crop. She was paid .25 per bushel. The Wilson family drove down the loaded wagons to the depot at Folsom, where they were unloaded onto railroad cars and transported to Kansas City.

About 1910, Clara, age 40, married Harvey Bailey. To this union, one child was born, Eva Lorraine "Clarice", born Mills County, Iowa. Harvey was a good father to his stepchildren.

Clara's daughter Frances told me about the time her mother age 95, found a small screw they had been unable to see. Frances had dropped a small eyeglass screw on the kitchen floor. She and husband Carn, looked and looked in the area where it fell. Clara asked where it might be, went to the spot and immediately picked it up!!!

Clara attributed her long life to "just good living, nothing fancy." She never used lipstick or makeup. She never had a grey hair until she was 80, said she never let things worry her. She left her home shortly after Harvey died, and lived with her daughter Clarice. She died December 11, 1973, at 103 years of age.

Clara Romana Gowens Turner Will is Great Grandmother to Viola Lawrence. I put this information together with the help of Frances Godsey, daughter of Clara and Daniel Wilson. Frances is still living, she was 95 in September. 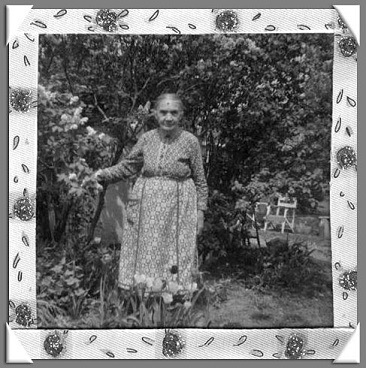