Barnabus Ray was born in late 1804 in Randolph County, North Carolina. He grew to maturity in North Carolina, fathered a large family in Indiana, and moved to Iowa in middle age.

Barnabus was the son of Hudson and Margaret (Byerly) Ray. The family lived near the Uwharie river in Randolph County, until about 1818, when the family moved to Rowan County, North Carolina, where Barnabus was counted as part of his father's household in the census of 1820.

Barnabus' family moved to Iowa where he purchased land in Madison County on 02 Mar 1856. His son Joseph died fighting for the Union in Mississippi on 13 Mar 1863. Another son, Isaac, survived his service in that conflict. 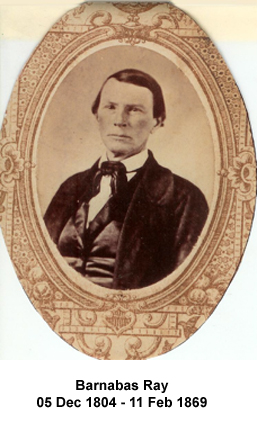