Almond Frank Reed Frank was born in the Clanton Valley of Walnut township, Section 10, Peru, Madison County, Iowa, October 14, 1894, the first child of Austin B. Reed (1852-1918) and his second wife, Altha Mae Beardsley (1871-1946). Frank grew to adulthood in Walnut Township and attended the school at Peru.

Frank farmed and worked in the Peru Rock Quarry until he answered his call to serve in the Army of World War I; he was inducted May 27, 1918, training at Camp Dodge, Des Moines, Iowa. He was a member of Company E, 349th Infantry, 88th Four Leaf Clover Division, 2nd Battalion, until May 30, 1919. He sailed to Brest, France, August 8, 1918, aboard ship Olympic; and returned aboard ship Riaandam. He was mustered out Jun 11, 1919.

After marriage, they farmed near Peru for seventeen years before moving to Buffalo, Dallas County, Missouri, in 1942, where they farmed for twenty-two years. Frank worked for a short time for M.F.A. Milling Company, and for Frisco Railroad Freight Dock. He also worked several years as a meat cutter, and as a carpenter.

After selling their farm and retiring to a small acreage in 1964, Frank enjoyed gardening, fishing and bee keeping. He passed away at Springfield, Missouri on May 13, 1982 after a lengthy illness. 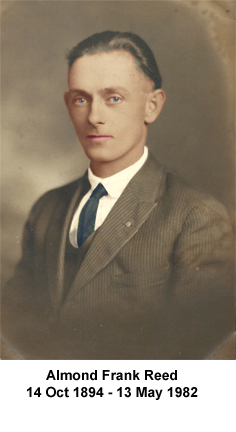