Sunday dinner for the immediate family was served at the Johnson House. In the afternoon, 70 guests called on Mr. and Mrs. Boleneus. Many beautiful bouquets and gifts were received.

Both residents of the county since early childhood, they were married Feb. 19, 1902, in Algona by Rev. R. T. Chipperfield, Methodist pastor here then. They farmed for many years, first near Titonka, and later in the Wesley community. They retired to their home here five years ago.

Two children of the couple are Robert Boleneus, on the home farm near Wesley, and June (Mrs. Ray McMahon) of Algona. Grandchildren are James, Elizabeth, Thomas, Pauline and George McMahon, and Bobby Jean Boleneus. 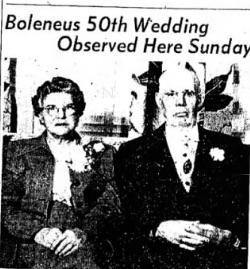