She attended Pekin Public Elementary School from 1972 to 1980. In 1986 she graduated from Vici Public Schools. After graduation, she volunteered in Vici Public Schools, helping as a teacher's aide. She continued to be a light for the community working in hospitality at the Vici Nursing Home.

Stacy participated for multiple years in Special Olympics winning several medals in Bocce Ball. The camaraderie and enjoyment she experienced with other athletes, team members and sponsors were apparent by her beaming smile throughout the games. One memory she enjoyed sharing with others involved not only meeting and photographing with Garth Brooks, but also him autographing her Special Olympics shirt.

She was a strong and avid supporter of all Oklahoma Sooner Athletic Teams. So much so, her first two golf cards were red and white covered in Oklahoma Sooner Logos. Her bedroom was completely adorned in Oklahome Sooner décor including a life size wall sticker of Sam Bradford, her favorite player. Her third golf cart was bright yellow, her favorite color. She spent many hours on her golf cart giving rides all around town to her family and friends. Stacy looked forward to her monthly Bunco games and family Back Up Three Tournaments, which highlighted her competitive spirit.

She was born with Prader Willi Syndrome and given the odds to live eight years. Over the course of her 55 years, she experienced many challenges. She faced her challenges head on, with grit, determination and a never give up mantra. Her biggest concerns even during her challenges, were of others. She truly had the heart of an angel.

Memorials may be made to the Vici Methodist Church or the Vici Special Olympics in care of Shaw Funeral Home, P.O. Box 276, Vici, OK 73859.

Services were held Thursday June 9, 2022, at 2 p.m. at the Vici United Methodist Church with burial following at Sunnyside Cemetery, Vici, OK. Condolences may be made to the family at shawfuneralhome.net. Shaw Funeral Home of Vici. 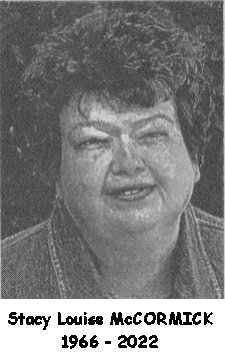