She was born Aug. 28, 1939, in Fairfield, Iowa, the daughter of Kenneth Hugh and Wyona Frances (LOVING) GIBERSON. Shirley was united in marriage to Harold Monroe COCHERELL on June 24, 1962, in Stockport, Iowa. He preceded her on July 21, 2015. Shirley was a devoted wife, mother and volunteer. In 1989, she was awarded the Joan Morrison Friend of Education for her four days a week volunteerism to the second grade class at Saunders School for 12 years. She enjoyed watching westerns and mystery movies, along with novels and watching the Chicago Bears with her son. She also enjoyed quilting, sewing, Swedish weaving and square dancing. Shirley enjoyed attending the Midwest Old Threshers Reunion and listening to and meeting the entertainers. Most of all, she enjoyed spending time with her family and friends.

She is survived by her children, Kenneth COCHERELL of Mount Pleasant and Martha (Lance) WELLS of Gridley, Ill.; her brothers and sisters, Gene K. GIBERSON of Belton, Mo., James DOROTHY of Oskaloosa, Jerry DOROTHY of Des Moines, Wendell (Deb) DOROTHY of Birmingham, Sharon (Gary) ASKEW of Hampton, Iowa, and Janet BARTHOLOMEW of Glenwood; her sister-in-laws (sic), Barb GIBERSON of Douds and Marilyn ALTER of Mount Pleasant; along with several nieces and nephews.

She was preceded in death by her parents; her husband; one daughter, Karen, in infancy; and one brother, Garry GIBERSON.

Shirley's family would like to thank the staff of Park Place Elder Living and EveryStep Hospice for their loving and compassionate care they gave for their mother.

Graveside services will be held at 11 a.m. Saturday, June 5, at Spencer Cemetery, rural Stockport, Iowa, with Chaplain Gordon Hawkins officiating (note: in Van Buren Co., IA). Following the graveside service, the family will host a celebration of Shirley's life at the shelter building at Morris Park. Memorials has (sic) been established in her memory for Alzheimer's Research or to Park Place Elder Living Activity Fund.

Online condolences may be sent to the family at www.murphyfuneralandmonuments.com.

Murphy Funeral Home of Mt. Pleasant is handling her arrangements. 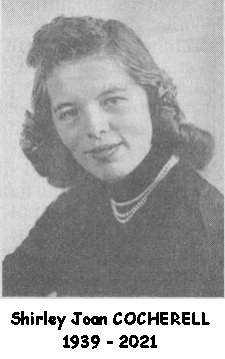