Marie Kreitzer (Gerleman) was born February 18, 1935, to Edmund and Cecilia Gerleman in Calmar, IA. She attended St. Aloysius School, and upon graduation, attended and completed cosmetology school in Waterloo. Marie met and had the first dance with the love of her life, Ron Kreitzer, in June of 1955 at the Inwood Ballroom in Spillville. Two years later on August 10, 1957, Marie and Ron were married. After honeymooning in South Dakota, they settled briefly in Ridgeway before establishing their family farm just south of Cresco in 1964. They spent many happy, busy, and memory-filled years raising three children on this farm: Dale, Keith, and Julie. In 2006, they moved to Cresco.

Marie loved to bake and tend to her garden, with her pies and preserves always at the ready for her family. She was a talented quilter who sewed love into the quilts she made for weddings and new babies; with a tiny MK embroidered somewhere on each one. Marie loved to spend time with her family and friends by going dancing, playing a few games of Euchre, or simply visiting with each other. She especially treasured time spent with her sisters.

Although Marie had a lot of accomplishments, including several baking awards, it was clear that she was the most proud of her four grandchildren. She never missed a concert, school play, sporting event, ceremony, or any other special event, and would proudly post their latest photos and newspaper clippings on her refrigerator. Marie was never too busy for a game of Go Fish, or to tell a funny story about when her grandchildrens dads were little, and gladly helped when someone waited until the last minute to complete a 4th grade quilting project for a Laura Ingalls Wilder unit at school. Her kitchen was always full of treats and hugs, and in the closet were plenty of dress up clothes, books, games, and toys. When great-grandchildren arrived many years later, her arms were always available for feeding and rocking them to sleep. Her greatest joy was watching her family grow.

There will be a visitation at Hindt-Hudek Funeral Home in Cresco on Monday, November 23, from 5:00 p.m. to 7:00 p.m. A private family Mass of Christian Burial will be held at Notre Dame Catholic Church with Fr. Jacob Rouse officiating. Burial will be in Calvary Catholic Cemetery.

Due to new COVID-19 restrictions, masks are required in the funeral home, 6 foot social distancing will be practiced along with a maximum of 15 people in the funeral home at a time during the visitation on Monday. We ask that the public please be patient as we direct people through the building. 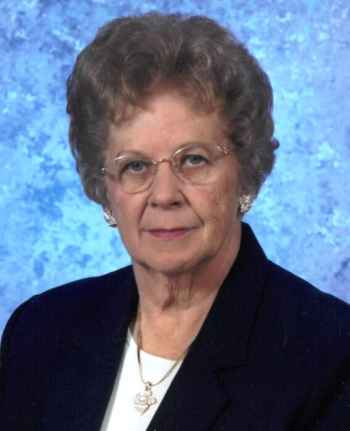