Deloris Jane (Ritchmond) Boss passed away on Friday, October 23, 2020 from complications of Alzheimers and COVID 19 at the Patty Elwood Center rural Cresco.

There will be no visitation and a private family service and burial will take place on Thursday, October 29th. Conway-Markham Funeral Home is assisting the Boss family with arrangements. Online condolences may be left at www.conway-markhamfh.com . Memorials may be directed to the family.

Deloris was born April 15, 1931 in Cresco to Earl and Eunice (Kutzbach) Ritchmond. Deloris, the oldest of four children, grew up as a farm kid in rural Cresco, Riceville and Alta Vista. Deloris graduated as class valedictorian from Alta Vista High School in 1949. She married Paul S. Boss in Alta Vista on August 16, 1950.

In 1951 they moved to Buckingham, Iowa where Paul was employed by Harry Green, The Flying Farmer. Their oldest, David, was born in 1953 while they lived in Buckingham. In 1955, they moved to Elma and farmed the Francis Shorty Meirick farm for several years until moving onto the Striech farm just south of Elma. Their son, Dan, was born in 1965, and a daughter Paula in 1969  Paula died shortly after birth. Deloris was an active farm wife and once Dan started kindergarten she also worked in the kitchen at the Elma Public School.

In 1974, they moved to New Hampton. Paul went to work at Sara Lee and Deloris worked in the kitchen at the hospital. They built a new home east of New Hampton and moved into it in July 1974. In 1985 they retired and moved to Bella Vista, AR to get away from the snow. Deloris worked for Cooper Homes in Bella Vista for several years scheduling folks to come see Bella Vista properties.

In 2004 they moved back to New Hampton to be closer to family. Her husband Paul passed away on September 9, 2006 from injuries sustained in a fall. Deloris remained in her home until 2016 when she moved into an assisted living apartment in New Hampton. When her Alzheimers got worse she moved to the Patty Elwood Center in November of 2018 were she resided until her death.

Deloris was known for her spotless house and her gardening - vegetables and flowers both. Before Paul passed she would can veggies, make pickles and jellies and jams from all the fruits Paul brought home  and always making cookies. She liked to travel with Paul  Hawaii, England and places in the states  visiting family. Family was important and she loved visits from her sons and their families, also visits from her siblings.

Deloris is survived by her son David and his wife Kathy of New Hampton and her son Dan and his wife Billie Jo of San Antonio, TX. She is also survived by her grandchildren Justin Boss of Portland, ME; Lindsey Boss Ruch (Todd Ruch) of Harrisburg, PA; and Mitch (Emily) Boss of New Hampton; Kristopher Boss of San Antonio, TX; and Danielle (Andrew) Charba of Denver, CO and 10 great grandchildren. Also, Deloriss siblings and their spouses: Violet (Don) Elenz of Sun City, AZ, Gene (Donna) Ritchmond of McGregor, TX and Don (Diana) RItchmond of Seattle, WA.

Deloris was preceded in death by her parents, her husband Paul and infant daughter Paula.

The family wishes to thank the staff of the Patty Elwood Center for the loving care they gave Deloris for these last two years. 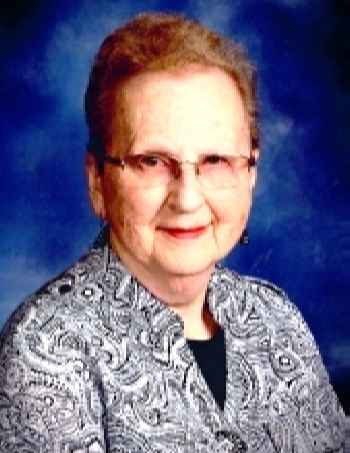