No history of Hamilton county would be complete without the record of the life of Frederick Olson, who for many years was one of the most valued and honored citizens of Ellsworth township and an important factor in its agricultural development. He was among the early settlers in this section and his life was closely identified with its progress and growth and his death a distinct loss to the community at large. Mr. Olson was born in Norway, October 2, 1824, a son of Ole J. and Margaret (Stime) Hopperstaff, natives of that country. His father died in Norway at the age of sixty-four and his mother passed away at the age of eighty-two. In their family were seven children: Mrs. Auberson, Mrs. Anna Brecha and Mrs. Anna Hopperstaff, all of whom are deceased; Frederick, of this review; Mrs. Laura Thompson, who has passed away; John, who resides in Capron, McHenry county, Illinois; and Julia, deceased. All of these children were born in Norway and all eventually came to America.

Mr. Olson received his education in the public schools of his native country and remained at home until he was twenty-seven years of age. He then determined to try his fortune in America and, crossing the Atlantic, he settled in Chicago, Illinois, in 1851. In that city and in its vicinity he remained until 1882, when he came to Hamilton county, arriving in March of the same year. Here he purchased two hundred acres of land on section 35, Ellsworth township, and gave his entire time to its development and improvement. He erected substantial buildings upon the premises and also a well furnished, modernly appointed home, into which he moved his valuable library of choice literature. Being a man of splendid ability and executive force and of keen discernment, he gradually became successful and attained a position of prominence among the representative citizens of the section.

In Chicago, Illinois, in 1852, Mr. Olson was united in marriage to Miss Laura Butler, a native of Norway, born September 2, 1834. She came to America with her parents in 1838, being about eleven weeks en route from Norway, and settled with them in Fort Dearborn, now the great metropolis of Chicago. Her parents were among the earliest pioneers in that section and found upon their arrival only three crude buildings. For many years they struggled against the primitive conditions and the father, Marquis Butler, is known today in Chicago history as one of its first and most prominent builders. Four brothers of Mrs. Olson, as well as a sister of Mr. Olson, are buried where Lincoln Park is located. Members of this family have always been interested in history and have taken pleasure in collecting valuable antiques. Mrs. Olson is in possession of a family Bible over four hundred years old, which is said to be one of the oldest books in the state of Iowa and is extremely valuable. Mrs. Olson's father died in La Salle county, Illinois, at the age of seventy-nine. Her mother, who was in her maidenhood Miss Alice Peterson, passed away in the same section when she was seventy-four years of age. Ten children were born to their union, including John, deceased; Laura, the wife of the subject of this review; Nellie, who lives in Aurora, Illinois; Lorinda; Herman and Albert, both deceased; and Martina Grover. Mr. and Mrs. Olson became the parents of twelve children: Ole Julius, deceased; Henry and Margaret Louisa, who have also passed away; Alice Josephine, who lives at home; Frederick Lawrence, who resides in Adams county, Colorado; Joseph Eugene, deceased; Lida Eugene, who lives in Los Angeles, California; Frantz, who has passed away; Esther Julia Ann, who makes her home with her mother on the farm; Josephine Matilda and Bertha May, who also live at home; and Frances Hartwig, who lives in California. The four eldest in this family were born in Chicago and the others in La Salle county, Illinois.

Mr. Olson was a stanch republican but his public spirit never took the form of office seeking. He was a devout member of the Norwegian Lutheran church, holding membership in Story City, Iowa. His death occurred in Ellsworth township, January 14, 1904, when he was nearly eighty years of age. At that time he owned two hundred acres of fine land, with excellent improvements, and this property he left to his wife and children, who are carrying on its development along modern and progressive lines. They are among the most honored and highly esteemed people in this part of the state, where the integrity, public spirit and loyalty which are traditions in their family are widely known and honored. The death of Mr. Olson deprived Hamilton county of one of its upbuilders and developers, a man of broad and liberal mind, a cultured scholar, a public-spirited and enterprising citizen. All the undertakings with which he was identified were profitable and prosperous, yet his truest success lay in the honor and esteem which he has won from his associates and friends. 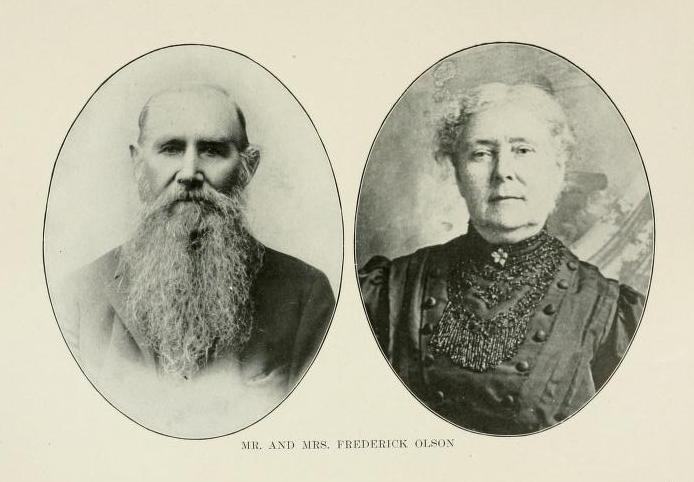