Nicholas F. Christenson is a prominent feed and grain merchant in Webster City and is influenced in his business life by sound principles of integrity and by intelligent industry, which qualities have dominated his career from its beginning and have brought it to its present successful issue. His offices are maintained at No. 539-541 Second street and his operations include dealings in flour, feed, seeds, hay, poultry remedies and many other kindred commodities. Mr. Christenson is a native of Norway in which country his birth occurred on August lO, 1862. His parents, Nicholas N. and Elizabeth (Peterson) Christenson, left their native country and came with four children to the United States in 1869. They settled in Webster City, in June of the same year, where the father followed the trade of tailor and was also active as a gardener until December 31, 1882. On this date his death occurred, when he was sixty-four years of age. Two years later, in February, 1884, his wife passed away when she was fifty-eight years of age. They were the parents of seven children: Adolph, who died in 1882; Nicholas, the subject of this review; Sigwal, who is a resident of Webster City; Dena, who is married and lives in Emmett county, Iowa; Lena, who is a trained nurse in Minneapolis; Anna, who married and removed to Wright county, Iowa; and Olaf, who is still a resident of Webster City. The four oldest children of this family are natives of Norway, while the three youngest were born in Webster City.

Nicholas F. Christenson was seven years old when his parents came to America. He received a limited education in the public schools of Webster City but was forced by the necessity of earning his livelihood to lay aside his books at the age of eleven years. At that early period in his life he started on his active career, finding employment in the nursery business of G. D. Sutton, of Webster City, under whom he worked for nine months, receiving for his services seven dollars per month. He then became a farm hand, working by the month on neighboring farms and continued in this line until 1882. He was economical in an intelligent way and was in that year enabled to rent the Kendall Young farm in Hamilton county which he improved and developed for four years. In 1886 he entered the employ of his father-in-law, Thomas Pringle, but this association lasted only four months. At the end of that time Mr. Christenson rented a part of the LI. E. Schroeder farm and there carried on agricultural pursuits for two years. From 1888 to 1890 he was active in the cultivation of the Robert Foster farm which he had rented. Although his success was gratifying in all of these activities and his harvests abundant he made various removals, always farming upon land which he rented. In 1890 he moved to Wright county, Iowa, on the M. A. Michelson farm, four miles east of Woolstock and here he remained for four years before he moved back to Hamilton county. In 1892, however, while living on the Michelson farm he bought eighty acres of land known as the Tatum farm, one mile northwest of Woolstock, Wright county. In 1894 he rented the Mattice section near Williams and his practical and progressive methods of agriculture brought him a substantial success. His dwelling house was then destroyed by fire and, in 1895, he abandoned his policy of farming on rented land and disposing of the eighty acres he had formerly purchased, bought the Phil Morris farm of eighty acres in Mulberry Center, Hamilton county, and brought his holdings to a highly improved and developed condition. In the spring of 1901 he sold his holdings and moved to Webster City with the intention of entering the commercial field of activity. In 1900 he had also bought a quarter section of land in Brookins county, South Dakota, and this he disposed of in 1904.

His business career in Webster City has been distinguished by shrewd intelligence and active interest in various lines of commercial development and a well deserved success in his chosen field of occupation. In 1903 he bought an interest in the Pringle & Company implement business and continued his identification with this concern for five years. In 1908, however, he met with an accident which incapacitated him for his duties in this capacity and he sold out his interest. In the same year he purchased the A. J. Brewer feed store and has since successfully conducted the enterprise under the name of N. F. Christenson. His dealings extend to all kinds of feed, grain and kindred articles. He does an extensive business in poultry remedies, oil meal, salt, hay, straw, flour and seeds, and is constantly increasing his activity. He owes his commercial success to energy and enterprise along modern lines and to his wise use of every favorable opportunity. His business has developed into an important concern, dominated by his forceful personality and guided by his undeviating policy of strict honor and integrity.

In 1882 Mr. Christenson was united in marriage to Miss Delfrata Pringle, a daughter of Thomas Pringle of Webster City. Mrs. Christenson died in June, 1892, leaving one son, Ray, whose death occurred in 1910. In March, 1893, Mr. Christenson was again married. His second wife was Miss Laura E. Rutledge, a daughter of G. T. Rutledge, a prominent farmer of Hamilton county. They have three children: George, born in 1895; Ruth, born in 1899; and Howard, whose birth occurred in 1907. The family reside at No. 526 Division street, Webster City.

Mr. Christenson gives his political allegiance to the prohibition party. He does not seek office and prefers to devote his attention to the successful operation of his business enterprise. Like many other men of today he planned and accomplished his own advancement and has come through a series of hampering obstacles to a place worth attaining in commercial circles in Hamilton county. Success is always honorable if worthily attained and Mr. Christenson's prosperity redounds to his own credit and is a contributing factor toward the commercial upbuilding of Webster City. 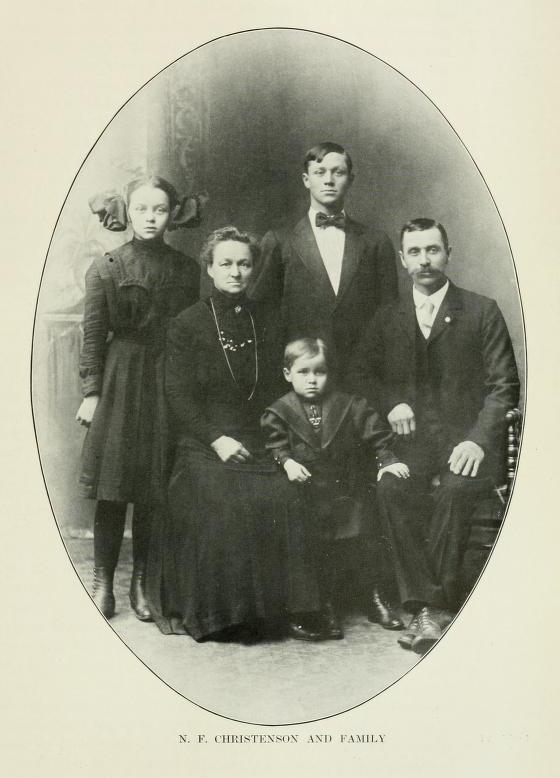